Annie Costner is an American movie director and an actress. She is also the founder of Sound Off Films, a company primarily involved in documentaries and historical narration. She entered the movie industry from a 1990 Western movie, Dances with Wolves. It was a movie directed by her father, Kevin Costner.

Next, she was offered a role in the 1995 post-apocalyptic movie Waterworld. Annie has made contributions to the industry as a producer as well. She is also recognized as the eldest daughter of Kevin Costner.

Who is Annie Costner?

Annie Costner was born in the family of Kevin Costner and Cindy Costner. She grew up in Los Angeles county with two siblings- Joe and Lily. Inspired by her father, she joined the TV industry at an early age.

During her first movie shoot, she was just six years old. Then, she got roles in other movies, documentaries, and TV series.

Annie is the American Actress following her father’s legacy since 1990. She played Annie in The Baby-Sitters Club, Ponytail in The Postman and, Melody in Lazy Teenage Superheroes.

Moreover, she was entirely focused on becoming a good actress before 2010. However, soon her interests went into movie productions.

As a director, Annie worked for The Discarded (2016), ESPN 30 (2017), and EL Cartel Cubano (2020). Furthermore, she remained the producer of TV series like Mother Wild for a long time. She was inspired by her father, Kevin, to work in the movie industry. He also taught her the skills necessary in videography.

Annie Costner is currently married to her husband, Daniel Arturo Cox. He is widely known by his short name, Dr. Danny Cox. As a medical professional, he is a diagnostic and palliative specialist. The two dated for some time before they decided to get married. On July 16, 2016, they got married at Annie’s father’s place located in Carpinteria.

A fan of the Costner family has uploaded the pictures of Annie Costner’s marriage over his Instagram. Annie wore a Vicenta crepe gown in the marriage, while her husband Arturo was in a blue navy suit. 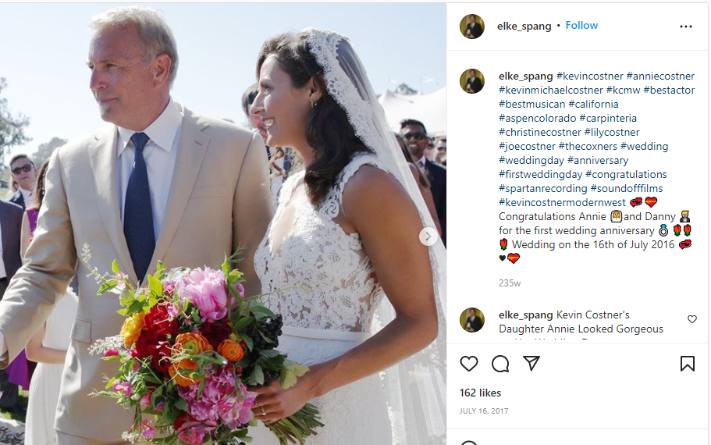 The couple has two children so far- a son and a daughter. On April 7th, 2018, their first child was born. Being a boy, they name him Vincent. Their only daughter was born on January 28th, 2020. Her name is Vida Valle Cox. We can see the recent picture of her family that she shared on her Instagram.

Waterworld actress has amassed a net worth of $17 million through her career in the movie industry. She gets roles in movies easily from the connections of her father. To date, she has been involved in 8 movies via acting and production. Also, she was involved in the making of the TV series- Mother Wild.

Annie Costner is not much active on social media platforms. However, she has an Instagram account with 924 followers. There, she uploads family moments.

How old is Annie Costner?