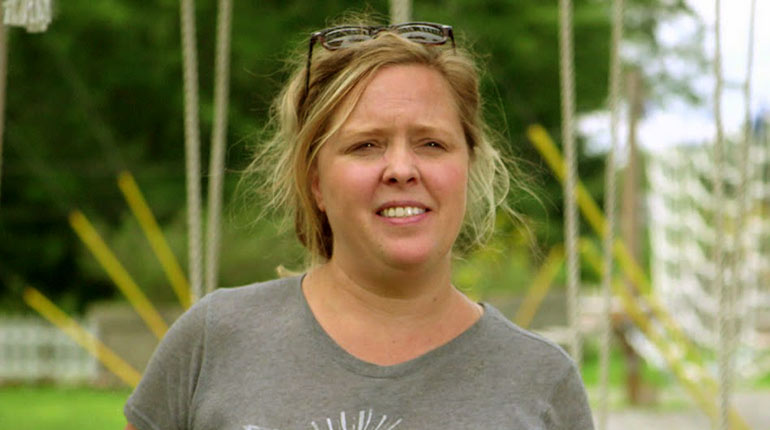 Ashley Morrill Eldridge is an American Tv Personality. She made her debut on Television when she appeared on Maine Cabin Masters. Ashley Morrill works alongside her husband and brother. Chase Morrill is the builder while her sister Ashley is the Project Designer. The show so far has good ratings, and it has gained several viewers.

Currently, it has four seasons, and it is evident that the Morrills make a great team. As you read along, we will be focussing on Ashley Morrill. Find out her career info, net worth, and marriage life. Who is Ryan Eldridge?

Ashley Morrill is mostly recognized as Chase Morrill’s sister. After all, Chase is the main cast in Maine Cabin Masters. Ashley happens to be the only female cast on the show as well. Chase and Ashley’s father taught them almost everything about building. It was a shame that they lost their father. Eric Morrill, Ashley’s dad, passed away on 27th July 2014. He had been battling cancer, and it was time for him to rest finally.

You must be curious as to where Ashley Morrill received her education. We learned that she graduated from the University of Maine-Orono with a Degree in Graphics Design. She has not disclosed any further information like what she did after her graduation. Perhaps she interned at certain companies before she became a professional graphic designer.

Ryan Eldridge is not only Ashley Morrill’s husband, but he is also her co-star/worker in Maine Cabin Masters. The married couple is so good together, or shall we say the perfect match? The thing about them is that they like to keep their details in a locked box. We have no information on their marriage details like when they met or how they met and when they got married.

Ashley and Ryan have no children. Some time ago, there were rumors that Ashley was expecting a child. Unfortunately, it turned out to be false. Could the rumors have started because of her weight gain? If they were to have children, they would make great parents. If you watch their television show frequently, you can see how much fun they have with their nieces. Chase Morrill has two daughters: Norrie and Maggie.

Ashley and Chase have a business known as ‘Kennebec Cabin Company’ in Manchester, Maine. Their team takes on significant projects which can budget up to $35k. According to the BLS, graphic designers tend to earn $47,677. However, we know that Ashley has quite the experience, so she might be earning more than that.

A look at her Social media Activity.

Let us take a look at Ashley’s social media accounts and see whether we can discover new things about her. The first noticeable thing about her is that she loves animals. Ashley and Ryan have two Labrador dogs: Sadie (white) and Gus (black). We also notice how much she loves posting pictures of her family and friends.

Ashley Morrill Eldridge was born on 27th January 1976. She was raised together with her brother Chase. He has been able to gain the nickname Master of Cabins over the years.

He is currently married to Sarah Morrill, and they have two beautiful daughters. His career as a builder has allowed him to build up his net worth to $600,000. Soon enough, Chase will be worth millions because there’s a bright future ahead of him.