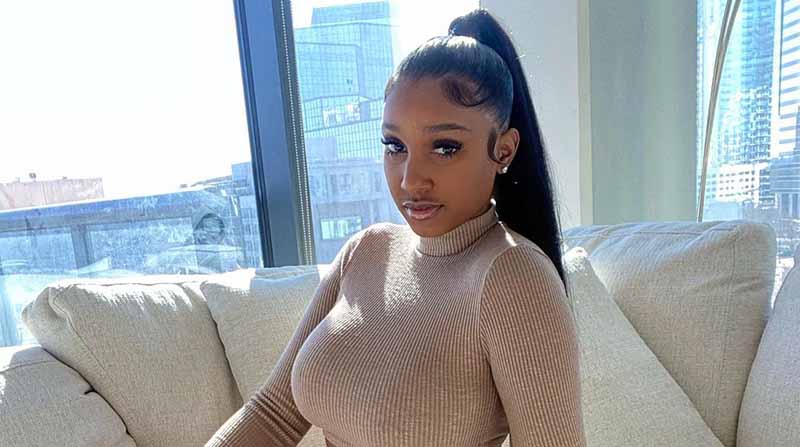 Bernice Burgos is a Puerto Rican model, businesswoman, and social media personality from New York, USA. Her appearances as a video vixen on popular music videos placed her under a glaring spotlight. She has been seen on multiple videos by renowned artists like Drake.

Bernice’s ladder to success has been referred to as ‘bold’ and ‘inspirational.’ As far as her modeling career is concerned, Burgos has featured in famous magazines such as ‘XXL’ and ‘SHOW.’

She is currently one of the most admired and respected figures in the fashion and modeling circles. Discover more about Bernice Burgos Net Worth in this review.

Who is Bernice Burgos?

Bernice Burgos is an entrepreneur, Instagram star, video vixen, and red-carpet sensation. To say that her childhood was difficult would be an understatement.

For one, she did not complete high school due to an unexpected pregnancy. Keeping the child resulted in her grandmother kicking her out of the house.

After a while, Burgos secured a job as a bartender. It was around this time that she’d get her big break. She was 27-years old when an agency would finally come calling. Her magazine covers caught the attention of several high-profile artists.

Bernice’s first experience as a video vixen came in 2009 when she was featured in a hit music video by Jim Jones and Ron Browz. The track was called ‘Pop Champagne.’

In the same year, Bernice secured a role in the film ‘Notorious.’ A year later, she made an appearance in ‘Ain’t Leaving Without You’ by Jaheim and appeared in Hal Linton’s ‘Southern Hospitality.’

As 2014 rolled around, Bernice was finally able to follow through with her long-term dream of owning a business. This led to the birth of the line ‘Bold and Beautiful.’ Bernice’s daughter, Ashley, sparked up the idea of the clothing line.

The sleepwear line is meant to close a gap in the fashion industry. Bernice discovered that there was a lacking element in what women wear when going to bed. Her line is meant to make all women of all body types feel sensual yet comfortable.

Bernice Burgos Has Two Daughters. Who is the Baby Daddy?

Bernice Burgos had her first daughter, Ashley Marie Burgos, when she was 15 years old. She gave birth to Ashley while still living at home in the Bronx. Her grandmother kicked her out. With absentee parents, Bernice was left stranded.

It forced her to move in with her boyfriend’s mother. Bernice disclosed that she had no regrets regarding her pregnancy. To date, the public is not aware of the identity of Ashley’s father. Apparently, the father was a nineteen-year-old who incessantly went in and out of jail.

Bernice and Ashley co-own the ‘Bold and Beautiful’ line. Bernice admitted that the two regularly ‘bump heads’ yet still work together quite well.

At the age of 25 years old, Bernice gave birth to her second daughter, Sarai Burgos. The identity of Sarai’s father remains unknown as well.

Is Bernice Burgos Married to a Husband?

Bernice Burgos is not a married woman. Despite this, she has been involved with several prominent figures in the entertainment industry.

Back in 2012, Bernice was spotted multiple times with the Canadian rapper Drake. These incidents fed the rumor mill as fans began wondering whether the two were dating. Despite the constant sightings, neither Bernice nor Drake commented on the officiating of the relationship. Bernice began dating Trey Songz in September 2013. The two split up in January 2014.

In 2015, Bernice began dating Marion Knight, the music manager, founder, and CEO of Kapital Records and Death Row Records. This relationship, however, was short-lived. There was no clear reason as to why it did not hold water.

The very next year, Bernice got involved with American rapper T.I. Their relationship sparked up a plethora of negative reactions on social media. Bernice received a lot of heat for being involved with a married man.

Tameka, aka Tiny, got into a social media verbal spat with Bernice during the time. Bernice revealed that Tiny and T.I were undergoing a divorce and therefore, her actions were justified.

Burgos is currently in a long-term relationship with husband-to-be 33-year-old hip-hop artist Meek Mill. Their romance began flourishing in 2018, which means that they have been dating for two years now. Fans are hoping to hear wedding bells soon.

In addition to this, Bernice is paid a whopping $500,000 to appear on music videos. Another source of income comes from her sleepwear line. Here, she has products that retail for anywhere between $64.99 to $89.99 each.

Burgos confessed to having had multiple surgeries on different parts of her body during an interview with ‘The Breakfast Club.’ She admitted to admiring the bodies of exotic dancers in strip clubs.

Bernice revealed that she underwent plastic surgery in a basement. Despite the shady location, Bernice assured the public that the procedure was legal.

Bernice said that she began her surgery by ‘filling out her butt’ after her second daughter’s birth. Evidently, she is proud of her surgery and is not afraid to share all the nitty-gritty details about it.

Bernice Burgos was born on 17th April 1980 in the Bronx, New York, USA. She is currently forty years old. The sizzling entrepreneur is of Puerto Rican descent. Her Zodiac sign fully coincides with her personality. The Aries sign represents a person who is passionate, relentless, bubbly, and bold. These four traits describe Bernice to the tee.

Bernice is now a Grandmother.

In March 2018, Ashley Burgos gave birth to her first daughter, India Ava Burgos. This makes Bernice Burgos a grandmother at 40 years old. This fact erupted some backlash on social media from Bernice’s fans.

The comments were majorly surrounding the continuation of Bernice’s line of work despite her grandmother’s status. Bernice responded to these negative reactions saying that she would not quit her career because of people’s opinions. She even disclosed her desire to have more children of her own.