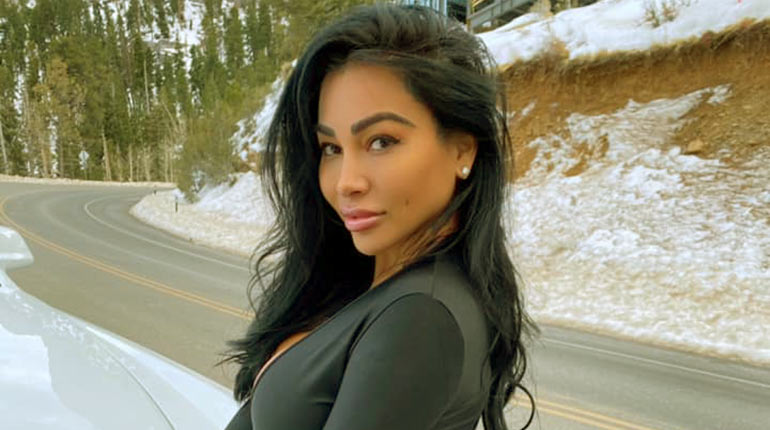 Brittanya Razavi is a 35 years old American model, actor, TV star, social media celebrity, author, and businesswoman. This lady has a quite compact resume due to her great body shape, talent, and hard work. She is a very famous name on Instagram and is also primarily known for her several films.

Razavi was the finalist for the 2009 ‘Rock of Love show that aired on the VH1 channel and was also featured in several movies, including ‘I Love Money,’ ‘School Charm,’ Dysfunctional Friends, 2012,’ etc. In this article about Brittanya’s bio, we will dig deeper into her personal life and get you exciting facts that you may not have known about her.

Brittanya has been accused of using plastic surgery to achieve her body shape. She was gifted with a great height, but the shape is obviously not natural. This is something she came out and confessed.

Taking it to Facebook, she accepted redoing her lips, having implants, and passing through the theater to achieve the shape she desired.

Accepting this has turned out to be a blessing to her; she has become a brand ambassador for various plastic surgery products and companies and also received partnerships that have improved her wealth.

Married to her husband, Lucky Moe.

In 2009, Brittanya got married to her husband, Lucky Moe Razavi. The two had dated for some time before getting married. How they met is unknown, but it’s believed to be through their line of work that is quite similar; they are both in the entertainment industry.

Despite the drama in her public life, Brittanya has proven to be a good wife and a good mother. There have never been reports of infidelity scandal or rumors of looming divorce.

Previously, Brittanya Razavi had a relationship with Nico Vasquez, and there are no fine details about how long Brittanay and ex-boyfriend Nico dated and why they broke up.

Moe is a CEO for an entertainment firm and an entrepreneur. He also has good coverage in digital media. However, there are no fine details about his personal life, such as his age and date of birth. Lucky is famously known for being the husband of Brittanya Razavi

Brittanya Razavi more than once come out in public to show off her two adorable boys. Her firstborn boy named Cash King was born on 16th March 2011. 11th October 2012, she gave birth to the second one and called him Legend Cash.

However, there are persistent rumors that have it that she has a total of four kids. We take this information as right until it is proven wrong. She had her first child when she was 15 years old. Romeo is his name, and he is living with his grandparents.

We are looking forward to seeing the fourth one that has been kept confidential. They may be too young or have other personal reasons not to be publicized.

About Brittanya Razavi’s tattoos and piercings

To enhance her beauty, Brittanya has tattoos almost all over her body. She is quite generous in flaunting the inked tattoos, some of which she has also opened up to give meaning. Let’s start with the stomach, and there is no better place to kick this off than that.

She has the statement, ‘One Light Saves’ nicely curved along with her diaphragm and a bold angle wing on the lower side, just below her birthmark. Turning her to see her back, we meet even more fascinating drawings.

Brittanaya Razavi has a massive tattoo on her back, very well inked dragon with the dark theme. It more or less looks like the devil’s portrait, with horns, a long tail that overlaps to her cover left butt, and scales all over. That is the most conspicuous one at the back.

On her forehead, neck, and shoulder, she has several tattoos, including the image of Christ, a crucifix, and other texts done on different fonts. She also has others on her fingers, including a cross. Last and not least, she has a text on her face, just below the forehead.

In summary, she is said to have more than 50 tattoos on her and has previously confessed of removing some that did not come out well. She got her first tattoo when she was 11 years old, so there could be more.

Britt also has many piercings, including on her dimples that she has filled with precious metals like gold, which complements her skin tone, enchasing her look.

Britt Razavi has mostly invested in adult content online. According to her Instagram bio, she describes herself as the highest earner in web entertainment. She has a website with adult content where she charges a monthly subscription of 30 dollars and 81 dollars for three months to view her explicit photos and videos.

Outside the internet, she is the co-owner and designer of clothing and wallet brand called ‘187 Avenue’. It’s a worldwide known brand that produces provocative prints on clothes for both the young and the old.

Britt was a co-author for a business book titled ‘Millionaire Self Talk’ released on. This is a guide book towards success that gives daily tips for greatness in the business field. After good receivership of this book, it is rumored that she is writing another book.

Brittanya Razavi’s wealth has grown progressively over the last five years. In 2016, Brittanaya Razavi’s net worth was estimated to be 6 million. In 2019, her net worth estimate was 8 million. As of 2020, her total wealth is expected to be worth 10 million USD.

She runs a booming business online and has several companies she does for product promotion and endorsements and a clothing line with a global footprint. Her net worth is set to continue to increase.

Other than these earnings, she also has real estate properties, which she says will continue to sustain her once her body starts to lose value (as she grows older).

Britt has 4.4 million followers on Instagram and 5.2 million on Facebook. A link to her elaborate website accompanies every post. This considerable following has increased her fame. As a result, she has been on the cover page for over 22 magazines worldwide including, Rebel Ink, MMA Sports Magazine, and Savage Tattoo.

Collision with the Law.

Britt’s father was charged and jailed when she was fifteen years old. This caused her mother to raise them. In 2009, Britt almost found herself in the same situation when she pleaded guilty of physically assaulting a woman. She was locked for seven months before being released on a half a million bail. Her husband was very supportive during this challenging time and visited her every Saturday for seven months.

Age, Date of Birth, and Siblings and Early.

Britt was born on 7th June 1985 as Brittanya O-Campo in Oxnard, California, USA. She was raised alongside four of her siblings, even though only one of them, Tiffany O-Campo, is known.

There are no details about Brittanaya Razavi ‘s parents. She got her education from the private school, which she says gave her the essential experience while learning to survive and make ends meet has given her the real experience. She is currently 35 years old, and her zodiac sign is Gemini.

Height, Weight, and other measurements.

Britt is 5 feet and 2 inches tall. Her body size is 36-26-25, at typical shape for a model. Her Weight is unknown, but from the look, she has a well-built body, approximately 70 or 80 kilograms.