Charlie Watts, the Rolling Stones drummer who propelled the band’s sound for nearly 60 years, has died aged 80. Continue reading to know the cause of death.

A statement from his London publicist, Bernard Doherty, to the PA Media news agency said: “It is with immense sadness that we announce the death of our beloved Charlie Watts.

“He passed away peacefully in a London hospital earlier today surrounded by his family. Charlie was a cherished husband, father and grandfather and also, as a member of the Rolling Stones, one of the greatest drummers of his generation.”

Earlier this month, it was announced that Watts was to miss the band’s forthcoming US tour as he recovered from an unspecified medical procedure.

With his limber stance, keen knowledge of jazz, and unruffled ability to make songs swing even when keeping the strictest time, Watts is regarded as one of the greatest – and most stylish – rock drummers of all time.

Among those paying tribute was Ringo Starr, his opposite number in friendly rivals the Beatles, who wrote: “God bless Charlie Watts we’re going to miss you man peace and love to the family.” Paul McCartney said: “He was a lovely guy. I knew he was ill but I didn’t know he was this ill … Charlie was a rock, and a fantastic drummer … Love you Charlie, I’ve always loved you – a beautiful man.”

Elton John wrote: “A very sad day. Charlie Watts was the ultimate drummer. The most stylish of men, and such brilliant company.”

Born in 1941, Watts was raised in Wembley, north-west London, and later the suburb of Kingsbury. His first musical love was US jazz from the swing and bebop eras, drumming along with jazz records after getting his first kit in his mid-teens. He later attended art school and became a graphic designer after graduation, playing in local bands on the side.

In 1962 he joined Blues Incorporated, a linchpin band in the British rhythm and blues scene led by Alexis Korner, playing alongside the Cream bassist Jack Bruce and more in a fluid lineup. Through Korner he met Brian Jones, who would play at Blues Incorporated gigs, and they found regular fans in Mick Jagger and Keith Richards, who also ended up playing with the group.

Jagger and Richards soon formed their own group, the Rolling Stones, with Watts joining in 1963. “ It was another band to join, I was in about three of them,” Watts later said; he began living informally with the group. “We’d rehearse a lot. They – Brian and Keith – never went to work, so we played records all day, in that rather bohemian life. Mick was at university. But he paid the rent.”

Always using a straightforward four-drum setup – positively minimalist compared with the multi-instrument setups favoured by many rock groups – he gave the Rolling Stones propulsive, unfussy backbeats on every one of their studio albums, beginning with their self-titled 1964 debut. “I don’t like drum solos,” he once said. “I admire some people that do them, but generally I prefer drummers playing with the band. The challenge with rock’n’roll is the regularity of it. My thing is to make it a dance sound – it should swing and bounce.”

Weathering the death of Jones in 1969, the band went on to epitomise stadium rock’n’roll – though Watts regarded them as a “blues band” – scoring 13 UK No 1 albums including the critically adored likes of Let It Bleed, Sticky Fingers and Exile on Main Street. Watts helped to power their high-energy world tours, playing with the group well into his mid-70s – his final tour was the two-year No Filter tour, beginning in 2017.

Alongside the Rolling Stones, Watts also played jazz in a series of groups over the years, including his own quintet and tentet, and Rocket 88, reuniting with Korner and Bruce in the late 1970s to play boogie-woogie.

In the mid-1980s, he was bandleader in the Charlie Watts Orchestra, a gargantuan unit playing big band jazz that toured the world, and released a live album, The Charlie Watts Orchestra Live at Fulham Town Hall. “Mick really likes it,” he said of his Rolling Stones bandmates in 1987. “Keith’s very annoyed, though, that we don’t have a guitar player. He thinks it’s a sacrilege. But I just told him that with 33 guys, it’s hard enough to fit everyone’s solos in as it is.”

Unlike the colourful romantic histories of his Rolling Stones bandmates, Watts was stable in his personal life: he married his wife Shirley Ann Shepherd in 1964, and they remained together until his death. He is also survived by their daughter, Seraphina, and granddaughter Charlotte.

Although known as a more temperate rock star compared with the rest of the Stones, Watts struggled with alcohol, amphetamines and heroin use for a period in the 1980s. “I think it was a midlife crisis,” he told the Observer in 2000. “All I know is that I became totally another person around 1983 and came out of it about 1986. I nearly lost my wife and everything over my behaviour … I wasn’t that badly affected, I wasn’t a junkie, but giving up [drugs] was very, very hard.” He said that falling down the steps of his cellar drunk while fetching another bottle of wine “really brought it home to me how far down I’d gone. I just stopped everything – drinking, smoking, taking drugs, everything, all at once.”

In 2004, he was diagnosed with throat cancer, but recovered after a course of radiotherapy.

After undergoing emergency surgery last month and announcing he would not appear on tour – he was to be replaced by Steve Jordan – he commented in a typically droll manner: “For once my timing has been a little off.”

The procedure had been announced as “completely successful” with Watts needing “proper rest and recuperation”. Richards had said: “This has been a bit of a blow to all of us, and we’re all wishing for Charlie to have a speedy recovery.”

Watts’ final release with the band was Living in a Ghost Town, a 2020 single taken from a studio album they had been planning.

Other artists paying tribute include Robbie Robertson of the Band, who said: “Charlie’s drumming is powerful and unique. His approach is entirely his own and helped shape the sound of rock’n’roll.” Paul Stanley of Kiss called Watts “one of the true timeless icons and the backbone of the Stones. Hard to fathom the loss.”

Joan Jett said Watts was “the most elegant and dignified drummer in rock’n’roll. He played exactly what was needed – no more – no less. He is one of a kind.” Tom Morello of Rage Against the Machine called him “one of the greatest and most important architects of the music we love … Rock’n’roll would not be rock’n’roll without the rhythm, the style, the vibe of this incredible musician.” Questlove, drummer with the Roots, called him “the heartbeat of rock’n’roll”. 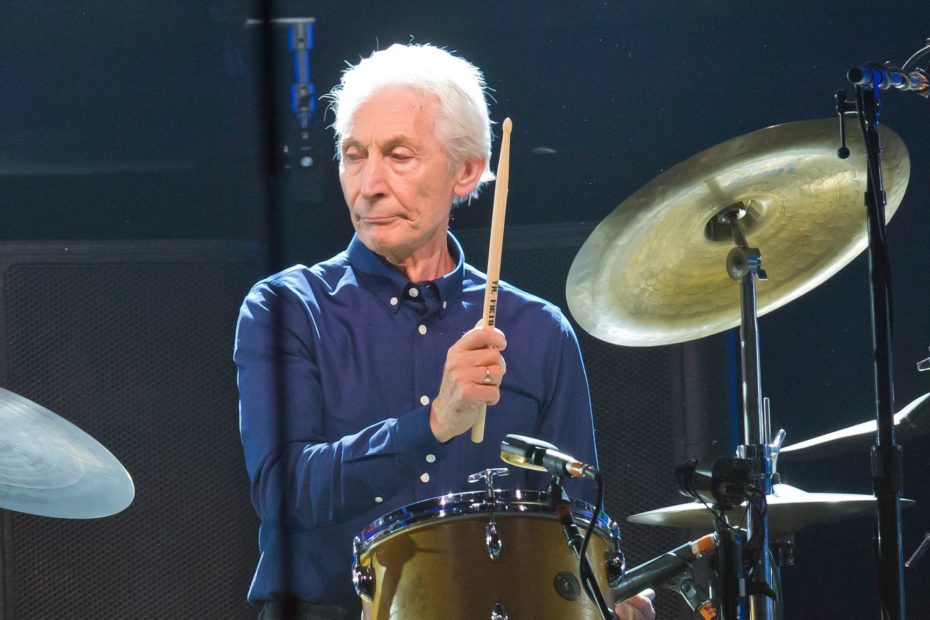