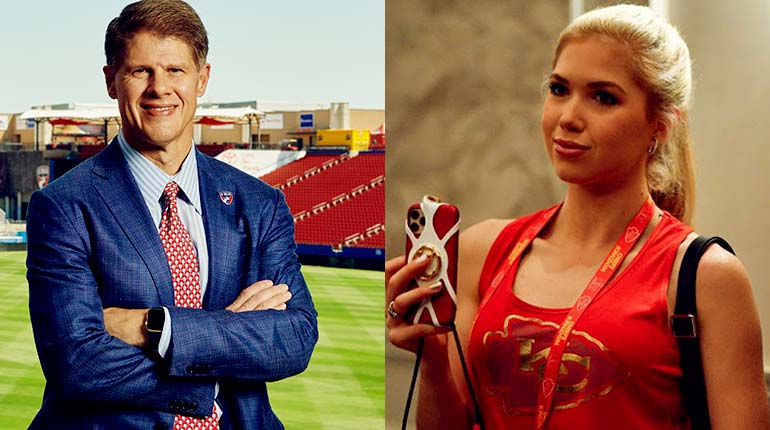 Gracie Hunt is the daughter of Clark Hunt. Clark is part of the top brass at the Kansas City Chiefs. He is also listed as one of the core founders of Major League Soccer. The Dallas native is 55 years old and a former student of the Cox School of Business. It gave him the platform to later go into investment banking.

Perhaps his most crowning moment came with his team’s Super Bowl LIV win. The Chiefs CEO is married to a woman named Tavia Shackles. Together, they have three children, one of whom is Gracie Hunt. Let’s explore her bio.

Who is Gracie Hunt?

Gracie Hunt is an NFL spokesmodel and one of the brand ambassadors for the Special Olympics. Her affiliation with the NFL is not surprising, especially if you take into account what her father does.

He is the CEO of the Chiefs! On her Instagram page, she claims to know more about football than most boys, and you’d be hard-pressed not to believe her!

The 21-year old model’s work as a spokesperson for the NFL has seen her pose with the Super Bowl trophy! Gracie Hunt’s big break came back in 2018 when she won the Miss Texas International Pageant. It put her on the map and led to her eventual discovery.

She is Influenced by Her Mom.

The NFL spokesmodel is the daughter of Tavia Shackles and Clark Hunt. Her mother is a 48-year old former cheerleader from Missouri. Like her daughter, Tavia was also a former beauty pageant winner. She was crowned Miss Missouri Teen USA in her youth. Gracie’s parents tied the knot sometime around 1993.

Besides the Miss Texas International Pageant winner, they had two other children. These were Knobel and Ava Hunt.

Gracie and her siblings were the grandchildren of Political Activist and Tycoon, H. L. Hunt. It is estimated that their grandfather had a net worth of $1 billion! So it is easy to see where the family wealth comes from.

Gracie Hunt was born on the 29th of March 1999 in Dallas, Texas. It means that she turned 21 years old a few weeks ago. Much to her disappointment, she did not celebrate this milestone with her friends because of the COVID-19 pandemic.

One of her birthday wishes was to have the chiefs win the super bowl. Instead, Clark Hunt’s daughter took to opportunity to commend essential workers that were putting their lives on the line during this period of quarantine.

Here’s to hoping that she has better birthdays ahead! She is fun, free-spirited, and independent, the authentic markings of an Aries woman. The family is also deeply religious, as is evident in their social media profiles. Grace, for instance, sometimes quotes bible verses and attaches them to her posts.

Gracie Hunt is not married yet. It is not surprising considering that she is still just 21 years old. However, she recently updated her Facebook status to reveal that she was in a relationship! The updated status suggests that she is now officially off the market.

We still haven’t discovered the identity of this mystery, man, though. Rest assured that you’ll get the news here first as soon as we uncover his identity.

Sources say that she formerly dated Denver Broncos QB, Drew Lock. Details about their relationship are scarce, yet we did learn that the two in all likelihood dated last year. In an interview with Sports Gossip, she answered a fan Q&A which asked her whether she had dated any football player before.

While initial reports suggested that the Broncos QB Drew Lock had dumped Gracie, she came out to shed some light on the situation. And she did it in a way only a beautiful woman can.

Gracie Hunt posted an ad for the popular dating social media application, Bumble. In the hashtag section, she said that she had never been dumped before. She went on to add that she was looking for a date for the Superbowl final.

Well, from the Facebook update she made, we can safely assume that she found one!

Remarkably, Gracie Hunt’s sister Ava was born on the same day as her sister, Gracelyn Hunt! She is 14 years old at the moment. Like her sister and mother before her, she shares quite a number of similarities. From the look of things, she is well on her way to becoming a beauty queen in her own right! The two often celebrate their birthdays together.

A few years back, they were even seen at the fair and on a Ferris wheel. Due to the dreadful COVID-19 pandemic, they had to celebrate their birthday apart this year. Hopefully, they will be able to pick up the tradition next year.

Her family has been involved in sports for decades.

Gracie Hunt’s grandfather’s name is one that many NFL historians will be familiar with. He was one of the founding fathers of the AFL, a league that later came to be known as the NFL. Lamar Hunt’s influence was also abundant in the registration of the North American Soccer League back in the 60s. It, in turn, would come to be known as Major League Soccer.

Not yet content, Gracie’s grandfather’s influence stretched to the world of tennis as he launched World Championship Tennis. Most notably, the ownership of Kansas City Chief’s has rested with Gracelyn’s family for three generations now. No wonder she is a fan, it is in her blood!

The Dallas-born pageant queen is trendy on Instagram. On her page, she has a following of 68.5K. The page is littered with evidence of her model career. We also learn about her commitment to her faith. You’ll find a bible verse, Provs 3:5, the very top of her page.

On Facebook, we find out that she is a former student at Highland Park High School. Gracelyn later enrolled at another high school, Ursuline Academy of Dallas.