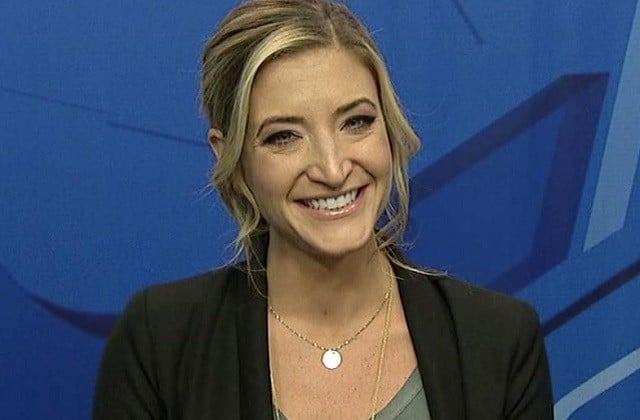 NFL is one of the widely celebrated games in America. Apart from the players, people are also fans of this sport’s analysts, including Cynthia Frelund. She is one of the most talked-about sports journalists, who many believe to be a great addition to this game.

The Executive Producer for NFL Media, Michael Mandt, labeled Cynthia as someone who can break down complicated game stats such as player position, scores, patterns, etc. and then interpret them in a way that any amateur can understand.

This Predictive Analytics Expert joined the NFL in 2016 and rose to prominence ever since.

Though she graduated with a degree in biology from Boston College, Cynthia found her career in journalism. To enhance her career, Cynthia attended Northwestern University to study Masters in Predictive Analytics, followed by a Master’s in Business Administration from the same university.

While completing her Master’s education, she focused on Entrepreneurship, Innovation, Finance, and Marketing.

Apart from academics, she also indulged in extracurricular activities. Hence, she was the Vice President of the Marketing Department while she was in business school.

To enter the analytics world, Cynthia worked in several firms as an analyst. She was a Business Development associate at Disney ABC Television Group in 2010. Apart from that, Frelund also worked at ESPN for the Associate Director of technology and development position.

Finally, she turned to journalism. According to her LinkedIn, Cynthia started working for the NFL network in 2008. Initially, Cynthia began as a live analyst of predictive analytics of NFL. Due to this, she became the first-ever analytics expert for the NFL.

Over the years, the NFL has relied on match statistics, and unique statistic information to predict the games, and Cynthia was too good for this position. Her academic background works as an advantage here. She’s able to understand complicated charts, graphs, and data quickly and draw conclusions from them.

Since she is the first on-air predictive analyst, she has forged a new path for herself. Therefore, many regard Cynthia as an important figure in the journalism sector and NFL. Her prediction style may even influence the playing style of the teams.

One of the things that fans are intrigued in knowing about Cynthia is her marital status. Though Cynthia is very famous among the NFL fanbase, she chooses to keep her personal life away from the media.

Due to this, it is difficult to tell whether Cynthia is in romantic talks with anyone at the moment. Perhaps her occupation as an analyst has occupied a large part of her life. As a result, Cynthia does not get personal time to find her potential lover.

Even on her social media, Cynthia frequently uploads pictures with her coworkers and updates regarding NFL. People have mistaken some of her coworkers as Cynthia’s lover as well.

Similarly, the 41-year-old Cynthia Frelund’s husband is a mystery so is her children.

According to Cynthia Frelund’s Wikipedia, she was born on the 24th of August 1979. Currently, Cynthia is at the age of 41 years. Despite hitting 40, she has maintained herself very well. Frelund took birth in Okemos. Her parents are Maryanne Frelund and MacGyver Frelund.

Net worth and Salary.

Cynthia is one of the essential panelists and a shrewd analyst of such a popular game. Hence, Cynthia’s wealth has to be considerably high.

The 5 foot, 6-inch journalist Cynthia Frelund has a net worth of $1 million as of 2021. Talking about her salary, a football analyst generally earns an average of $56,460.

However, top earners can go on to make almost $102,500 a year. Though Cynthia has not revealed her salary in detail, one can estimate that her salary falls between the mentioned salary range.

Apart from this, Cynthia also earned a considerable sum of money through her profession as a fitness instructor at East Bank Club.