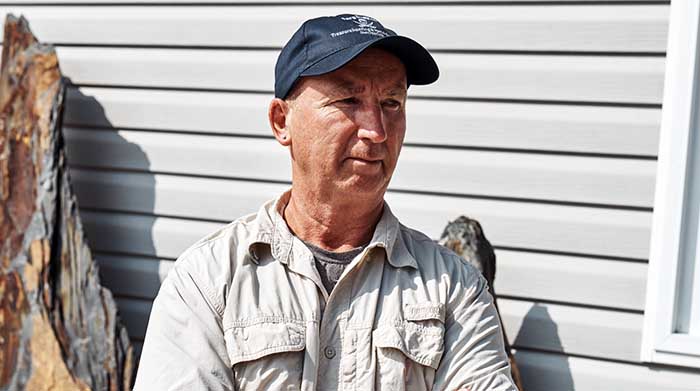 Gary Drayton is a professional treasure hunter and also a television personality who grew to fame after casting in a reality television show, The Curse of Oak Island.

His job is considered one of the most dangerous and risky jobs globally, yet he enjoys the thrill of doing so. Some even considered him to be one of the luckiest people in the world who is making a fortune by doing the job that he loves the most.

Moreover, he also gives private hunting treasure lessons to those interested in the field.

Gary Drayton is an English who was born on the 30th of May 1961 in Grimsby, Lincolnshire, England. Ever since childhood, Drayton had a great interest in hunting and searching for precious objects.

Also, he worked as a bottle digger in the United Kingdom for several years in his young age where he used to search for old bottles, marbles, clay pipes and used to dig ancient Victorian trash pits where he used to find several old coins, clay pipes, and ancient bottles.

Some simple hobbies can truly have profound changes in one’s entire life. In the subsequent years, he developed more interest in treasure hunting and is one of the world’s prolific hunters.

Most of Gary’s fortune comes from his profession as a treasure hunter and from appearing in The Curse of the Oak Island. Although Gary has never truly revealed his exact net worth figures, he is believed to have a net worth of approximately $2 million.

His fortune is accompanied by his television appearances which pay him a decent amount, and his best-selling books also help to add up to his wealth.

Gary’s interest in hunting for treasure began when he moved to South Florida with a metal detector. He used to go to the beaches of Florida, where he would find Spanish Silver Piece of Eight, 1715 Spanish Fleet Gold, and Emerald rings.

Getting into The Curse of Oak Island.

His findings were becoming popular every day and were able to catch the attention of dozens of Hollywood producers.

Eventually, Gary Drayton was led to his various appearance on television shows and finally got the opportunity to join the cast of ‘The Curse of Oak Island’ as the resident metal detecting expert.

His popularity was significantly boosted due to his role in this series that ran for 5 seasons straight.

Besides this, he also made an appearance in several other treasure hunt shows like ‘Expedition Unknown’ in 2017, ‘The Curse of Civil War Gold’ from 2018 to 2019, and ‘The Curse of Oak Island: Drilling Down’ in the same year.

Gary also wrote several books related to treasure hunting and beach and water hunting, such as ‘A Guide to Searching Heavenly Hunted Beaches,’ ‘How to Find Coins and Artifacts at the Beach,’ ‘How to Read the Beach and Water.’ These are some of his well-known books that became top-selling books.

Gary Drayton’s most memorable finding is the magnificent 300-year-old ‘Emerald Treasure Ring,’ which is worth $500,000 and is considered as the true finding of a lifetime.

His other treasures consist of gold with nine flawless Colombian emeralds, Spanish silver pieces of eight, Silver religious artifacts from the Spanish from the 1715 fleet, and many more.

There is not much information about Gary’s married life. However, he is known to be married to Jennifer Gail Sauve.

Their marriage has been kept secret from the media and general public as none of them wants to share any details about their personal matters with the public.

As for their children, Gary and Jennifer have been blessed with two daughters, Anya Drayton and Katya Drayton.

Gary and his two daughters’ relationship is very loving since he seems to adore his children judging from his social media posts.

Some Facts about Gary Drayton: