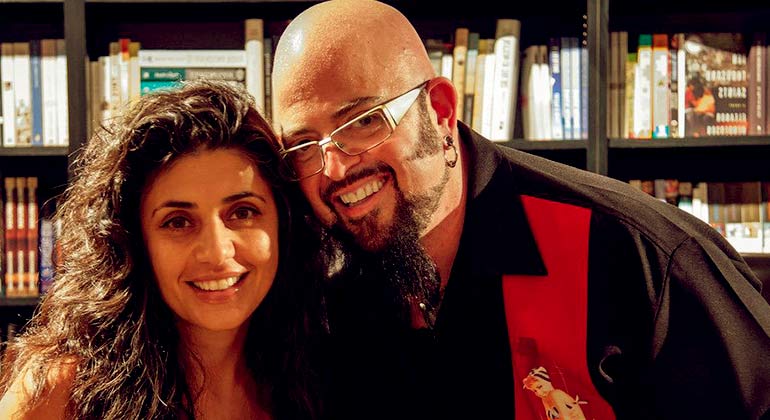 Jackson Galaxy’s birth name is Richard Kirschner. He is an American who was born on the 28th of April 1966 in New York City. Jackson is the host of a television show called My Cat from Hell. He is also a cat behaviorist. The TV Host began playing the guitar when he was just ten years old. Jackson graduated from the University of Iowa where he attained a degree in the theatre back in 1991. He legally changed his name when he was in his twenties. Read this to know Jackson Galaxy’s net worth and weight loss. Also, meet his wife Minoo Rahbar.

Who is Jackson Galaxy?

Jackson Galaxy is a rockstar. In 1992, Galaxy moved to Boulder, Colorado where he became a musician. He became a behaviorist through his work with rescue cats. Jackson works directly with the Humane Society of Boulder Valley, but he didn’t stop there.

He also worked with other animal shelters and became a cat consultant in the year 2002. It came after he co-founded Little Big Cat Inc; with the help of Dr. Jean Hofve. He is a holistic veterinarian. People in his profession offer consultation services to cat owners.

They help them focus on the connection between physical and behavioral health. Jackson later moved to Los Angeles in 2007 and re-established a private consulting practice.

He used the practice to work one-on-one with clients in order to improve the cats with a behavior issue. Jackson also works with animal shelters and rescue organizations which promote his “Cat Mojo” approach to feline behavior.

Presently, Jackson works with the board of directors at Stray Cat Alliance and Fix Nation in Los Angeles. He also serves at the Board of Advisers for Neighborhood Cats in New York City. Jackson started a reality show which he titled ‘My Cat From Hell.’

It was produced by Animal Planet in May 2011. The show focused on him working with cat guardians especially couples in order to resolve conflicts and misunderstandings. These sometimes arise between them and their cats.

Jackson and his wife Rahbar met during a kitten rescue benefit gala and later went out for coffee. It didn’t take long after that for them to realize that there was chemistry; they began dating shortly. The two got married back in June 2014.

Jackson and Minoo Rahbar’s wedding ceremony was peculiar, to say the least, as it was held in a pet sanctuary in Kanab. The happy couple is passionate about doing things together. They have also contributed significantly to each other’s aspirations.

Who is Minoo Rahbar?

Minoo was born on the 8th of August in the 1960s, possibly in India. Presently, she holds an American citizenship. She is an animal fanatic and cat rescuer.

Although she doesn’t usually talk about her past, we were able to learn that it was fairly traumatic. Jackson Galaxy’s wife Minoo was raised as an only child by her parents. Her country fell under disarray after several terrorist attacks. It resulted in Minoo Rahbar family fleeing to the US. Minoo is popularly known for her significant media exposure because of the romantic involvement with Jackson.

Minoo is a former student of Grant School, which is located in Van Nuys, Los Angeles. She joined the institution aged 10. After graduation, she enrolled at the University of California, Berkeley where she graduated with a degree in anthropology.

Jackson usually talks about the strange glares he gets from people who judge him because of the love he has for cats. Although most of his viewers are women, he never lets the stereotypical belief that men should own dogs bother him.

Jackson is married to a beautiful wife. In fact, the pictures of his beautiful wife are uploaded on Instagram, negating the rumor that he is gay.

Presently, the cat behaviorist and television host Jackson Galaxy net worth is $1.5 million. It makes a steady growth in his earnings.

Jackson Galaxy gets most of his income from his private consulting practice, Little Big Cat Inc. He has also made a few guest appearances on TV shows such as Think like a cat and Cat 101.

Another revenue stream comes from his work as an author. Jackson has made some money from his well-established books such as Catification. Aside from this, he also has a YouTube channel where he tutors people on how best to take care of and handle cats. Therefore, his net worth is not that surprising.

Just like most people in the world, Jackson had an addiction. In his case, it was food. There was a time he made a life-changing decision to rectify it, but it almost cost him his life. Jackson believes that there is no secret to weight loss. He also doesn’t like to talk about how he underwent gastric-bypass surgery to remove the excess fat from his body. At the time, he weighed over 400 pounds. Now he lives a healthier life.

On Facebook, Jackson has a page with the name Jackson Galaxy where he has 1,886,388 likes and 1,803,138 followers. Just about an hour ago he posted “Fraser (and his human, Donna) sending us a simple message on this #motivationmonday…aspire to cat-liness!

And 19 hours ago he posted “Attention parents of #WallflowerCats! If you didn’t catch the premiere of yesterdays YT vid, head over now. If you don’t know the difference between “caving” and “cocooning,” One will keep them scared and small, and the other…tune in and find out! #teamcatmojo”

His twitter handle is @jacksonGalaxy and about 23hours ago he twitted “Our little man Pishi, 17 yrs old, demonstrates for us all the art of becoming one with your bed. #zencat #teamcatmojo https://instagram.com/p/B-myqQalVRX/“