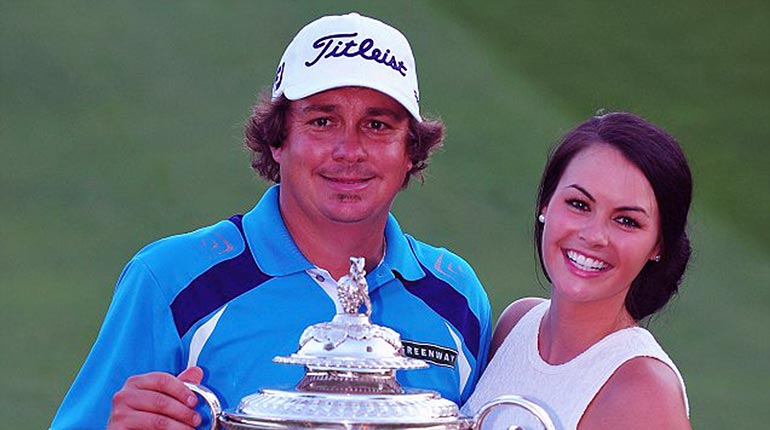 Amanda Boyd is a 32 years old American public figure and real estate agent. Amanda is famous for being the ex-wife of American professional golfer Jason Dufner. She has not made any achievement in her career that can be said to have earned her recognition.

Still, her entanglement with two prominent golfers, one married her and later divorced she and the fine details about her relationship with the second one is one stone that is still unturned. She has been single for years now, and everyone is asking what she is doing, and that is the objective of this article. We will focus on her relationships, net worth, and other facts.

Jason and Amanda had two different encounters. They first met in 2009; Jason’s friend recommended Amanda to him while she was still studying at the University of Alabama.

Dufner was already a member of the Professional Golfers Association. Due to his busy schedule of travel and tours, he did not have given much attention to his relationship, and it did not flourish by then.

A year later, in the eve of 2010, they met again in New Orleans and picked from where they left. This time, they made commitments to their relationship, despite running busy and hectic schedules, Jason with golfing and Amanda with studies.

After graduating from the university, their relationship picked up a good pace, and they were ready to take it to the next level. Before then, they used to have long conversations on the phone that kept the wheel moving. But now, she was ready to commit herself fully.

On 4th July 2011, exactly six days after winning the Zurich Classics, Jason proposed to Amanda in STK in New York. They were on the rooftop and the River Hudson on the foreground, in front of them the fourth July colorful fireworks. He took that moment to get on his knees, in the background was a cheerful crowd who showered them with camera flashes and drinks.

On 5th May 2012 in Fountain view Mansion in Auburn, Jason and Amanda Boyd gave their marriage vows to each other in a colorful outdoor wedding. Everything in the wedding was perfect, Amanda’s father grew the petals used for the decorations, and they even hired a chef from New York. After their marriage, their popularity spread like wildfires. His wife was always with him in many of his tours and games. The two are inseparable.

Why did Jason Dufner and Ex-wife Amanda Boyd Divorce?

Their wedding was a shocker to many. People wondered how such a sexy and bold lady was going to keep up with a calm and composed golfer. They were never a perfect match. In March 2015, merely three years of their marriage, the two ended their marriage.

The leading cause of their divorce was ‘irretrievable breakdown’ and “a complete incompatibility of temperament that the parties can no longer live together,” according to the divorce papers.

However, rumors had that the sexy lady was secretly eyeing yet another golfer, with a higher rating than her husband, the living legend himself, Tiger Woods. The two had a secret affair. However, the little facts about these rumors have not seen the light, but Woods acquired the named a ‘serial cheater’ two things happened that almost coincide with each other.

In February 2015, Wood was dumped by his girlfriend by then, Lindsey Vonn, and a few weeks later, Amanda Boyd got divorced by Jason.

Amanda was born in 1988 in Millbrook, Alabama. Her birthday is, however, unknown. She is currently 32 years old. The details of Amanda’s parents and siblings are also unavailable, but she grew up in her hometown.

She had her early stages of education before moving to the University of Alabama, where she got a bachelor’s degree, specializing in marketing, and graduating in 2010. She went into the real estate business as a marketing agent. After her divorce, she took part-time classes and got licensed as a real agent in 2015 and has her career established ever since.

What is Amanda Boyd Doing now?

Jason Dufner’s ex-wife Amanda is a graduate, with a degree in marketing. After her divorce, she started working as a real estate agent in Florida, where she acquired the house where she resides. The details of the company she works under or how much she has made so far is unknown.

In terms of relationship, she is still unmarried, similar to Jason. The two have not been linked to any other partners ever since they went separate ways. One interesting observation we have made is that Jason still has a photo they took with Amanda Boyd together as his profile on Twitter.

That may mean that they could still be friends. Amanda is still young, and currently, at her prime age, we hope she finds and falls in love very soon. Be sure to catch any rumor that comes out about any of these two right here.

Amanda runs two Instagram accounts, one for herself, 2K followers, and the other one for her dog, with almost 8K followers. It is said that she deleted her first account after the divorce and only used her dog’s account. However, she recently created one. Her posts include places she has traveled to, including Cuba, Paris, Antwerp, and other sweet memories with friends.

Golf is a game of class. Professional golfers are pretty wealthy people. That case applies to Jason Dufner. Jason Dufner’s net worth is $14 million.

As opposed to his short-lived marriage, he had a long and successful golfing career having started winning awards in college. He won many tournaments and trophies, including Presidents Cup, 2013, which earned him a good salary and increased his popularity.

His ex-wife received 3 million USD and Mercedes Benz SUV as a divorce settlement. Amanda used part of that money to buy a house in Jupiter, Florida, worth 675,000. This is where she resides and runs her career as a real estate business.