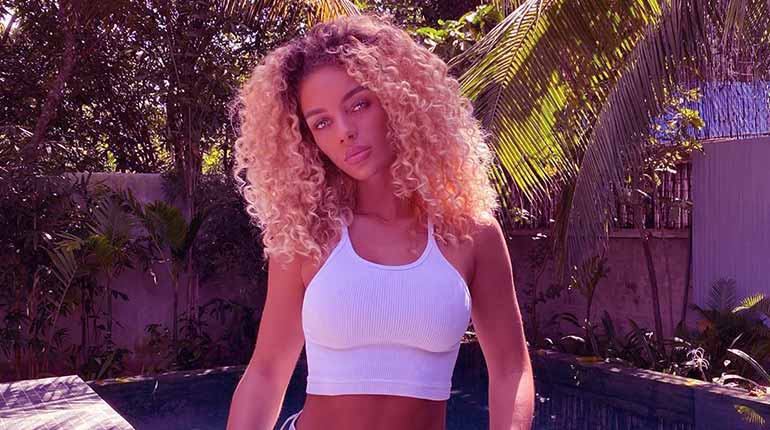 Jena Frumes is a 26 years old American model and social media celebrity. Being a model is probably the most contributing attribute in Jena’s fame. Jena has appeared in several music videos, including Jacob Latimore vixen, for the music titled ‘Ah Yeah.’

She has also worked as a model for Fashion Nova and Pretty Little Thing’ among other projects. Jena Frumes was also featured in the short sporty film titled ‘Guava and Mango.’ Modeling is her life, and she lives it to the fullest. With all that beauty, you may ask yourself, who is she dating currently, and how has it been in the past? That and other personal facts about her is the objective of this article.

Jena has a great body, close to perfect, she is a model, so we can’t expect anything less. To achieve such a shape is not a walk in the park, Jena has been accused of using plastic surgery, including hip injections and other treatments to make her body shape. She denied these allegations and stated that her shape came about as a result of hard work on physical exercise and a strict diet. It’s through that she attained and has maintained her shape.

Past and latest relationships.

Jena has had several entanglements over the past few years, thanks to her stunning look. Currently, she is rumored to be dating music star Jason Derulo. The two have participated in several Tik Tok challenges and shared the videos.

It is evident that they were lockdown roommates during the COVID 19 pandemic. They were first spotted together in March. More about the status of their relationship is yet to be revealed.

In January 2016, Jena was involved in a project where Nick Cannon was also taking part in. It is reported that they started dating and continued to see each other for up to fourteen months. Jena was also linked to Mart Barnes, but their relationship did not last long.

Jena Frumes also dated England and Manchester United striker, Jesse Lingard. The two seemed happy at first, sharing moments and memories on social media. However, after he accused Jesse of cheating on her with a fan, Jena walked away from that relationship.

Last but not least, Jena also dated another big name in American football, Antonio Brown. She met Antonio days after booting Nick, and their relationship only lasted for a month. In conclusion, Jena is still young, and we can say that she is currently at her prime age, maybe she has found or will find someone to settle with her.

Jena was born on 21st September 1993 in the city of Cranford, Union County, NJ, USA. Jena Frumes is currently 26 years of age, looking forward to 27th late September 2020. She has a complex ethnic background with elements of African, French, America all blended in her. There are no details about her parents that could have shared more light on that.

She was raised alongside one sibling, her sister, and attended her high school in New Jersey before joining North Carolina Central University in Durham. The year she finished her studies, or the course she did is not known. She is currently living in Los Angeles, California.

Her Height, Weight, and Other Measurements.

Jena is five feet and four inches tall. She is weighing around 60 kilograms. She has blonde hair and her eyes are blue. Other measurements for her shoe, waist, etc. are not available.

As of 2020, Jena Frumes’ net worth is estimated to be between a quarter of a million and half a million US dollars. She has attracted various modeling jobs and has a suitable social media footprint where she earns from endorsements. These gigs have significantly improved her net worth. As time goes by, her wealth is projected to increase.

As a model, Jena has to showcase her past, current and upcoming projects. This is where social media comes handy in the world today. Therefore, she is very active on social media, enjoying colossal following 4 million people on Instagram. This number makes her one of the top earners on Instagram from New Jersey.