Mary Mouser took the world by a storm with a kick, literally. She went from being a child actress to being one of Netflix’s most prominent stars because of her acting skills which fans love. Moreover, the talented and beautiful actress is one of the entertainment industry’s gems.

Are you keen to fall in love with this charming 25-year-old actress too? Get a closer look at Mary Mouser’s career history in this write-up. Also, get to know her age, boyfriend, and dating life.

The Cobra Kai actress Mary Matilyn Mouser was born on May 9th, in the year 1996. Moreover, the young star is 25 years of age as of the moment.

Mary Mouser has been in the acting scene since she was a kid. Moreover, she started professionally acting in 2004. The actress’ first project was Without a Trace, and she portrayed the character Amy Rose.

Furthermore, she also participated in the Son of the Mask as Alvey Avery. Mary also appeared in 2005’s Scrubs. She then played the role of Princess Girl in the TV show Monk.

Moreover, she appeared in one episode of the 2005 drama Inconceivable as the character Kylie. Mary Mouser also kicked off her career in crime series such as CSI, Criminal Minds, NCIS, and Scandal. She played Cassie McBride’s character in CSI and Shelby Lockhart in CSI: Cyber. Furthermore, the American actress portrayed the character Kelly Gibbs in NCIS, Rebecca Farland in Criminal Minds, and Karen Grant in Scandal.

Mary participated in many other series such as Life in 2008, The King of Queens in 2005, Mr. Fix It, and State of Mind. Moreover, she portrayed roles for Life is wild, Lie to Me, Drop Dead Diva, Body of Proof, The Devil You know, and Freakish. Additionally, she also appeared in Scorpion, Hollywood Mom, Happy Together, and Room 104.

One of Mary’s most famous roles is Samantha LaRusso from the hit Netflix action series Cobra Kai. She played the role from 2018 until 2021. The actress revealed in an interview with Zach Sang that she did not have any experience in martial arts before starring in Cobra Kai. According to the actress, she did kickboxing and Muay Thai before the official training for Cobra Kai.

In addition, Mouser also tried her luck in the field of voice acting. She voiced a character for Tarzan II in 2005. She was also one of the additional voices for Final Fantasy VII: Advent Children. Furthermore, another one of Mouser’s voice acting gigs was for Dragon Hunters. She voiced the English version of Zoe.

In 2009’s The Hole, Mouser voiced Annie. She also participated in the short TV series of the hit children’s show Chowder, where she voiced the characters Ambrosia and Marmalade for two episodes. Lastly, she lent her voice to Baby Delgo for the animated film Delgo released in 2008.

Mary has participated in many short films as well. She voiced Lili in the short movie Holly Hobbie and Friends: Christmas Wishes. Furthermore, she also played Clara Fowler in Penny Dreadful.

As an actress, Mary Mouser also appeared in different films such as Mindy and Brenda, where she portrayed a young girl. She also participated in LA Blues, Ball Don’t Lie, All Kids Count, Saint Francis, Medeas, Frenemies, and Gates of Darkness.

In addition, the 25-year-old actress played the role of Audrey Gibson in Alexander and the Terrible, Horrible, No Good, Very Bad Day.

Mary Mouser’s source of income is mainly from her acting gigs. As presented, she has been credited in many films, TV shows, and voice acting gigs.

Furthermore, the actress also possibly earns through Youtube Ads as she has a Youtube channel with about 438,000 subscribers.

With all of Mary Mouser’s income sources combined, her net worth estimate is about $2 million. With the success of her acting career, there is a big possibility that her net worth will continue to skyrocket.

Is Mary Mouser Dating a Boyfriend?

Mary Mouser is dating her long-time boyfriend, Brett Pierce. Furthermore, they have been a couple for almost six years now. The two crossed paths back in 2015 during a party. Furthermore, in an Instagram caption, Brett shared that he approached the actress and initiated a conversation with her.

The Cobra Kai actress’ boyfriend, Brett Pierce, is also an actor famous for his role as Damien and Mitch in the TV show Solve. He also appeared in the popular hospital series Grey’s Anatomy as Ias Tyler Bordeaux.

The couple shows their affection towards each other through their social media uploads. In a tweet, Brett Pierce mentioned his girlfriend, greeting her with a happy birthday while describing her as a

“petter of bunnies and queen of the sloths.”

To which Mary replied

“THANK YOU MY LOVE (heart emojis).

Brett also played a part in Mary Mouser’s success. The actress revealed in an interview that her boyfriend called her, reminding her about her Cobra Kai audition. According to Mary, Brett told her to call the person in charge of the auditions and reschedule her audition.

Moreover, Brett and Mary own an adorable dog and uploaded a cute photo of them on Instagram. Mary captioned the photo,

“Merry Christmas from our little family to yours.”

There are no other details about Mary Mouser’s past relationships. Furthermore, her only known relationship is with her current boyfriend, Brett Pierce. 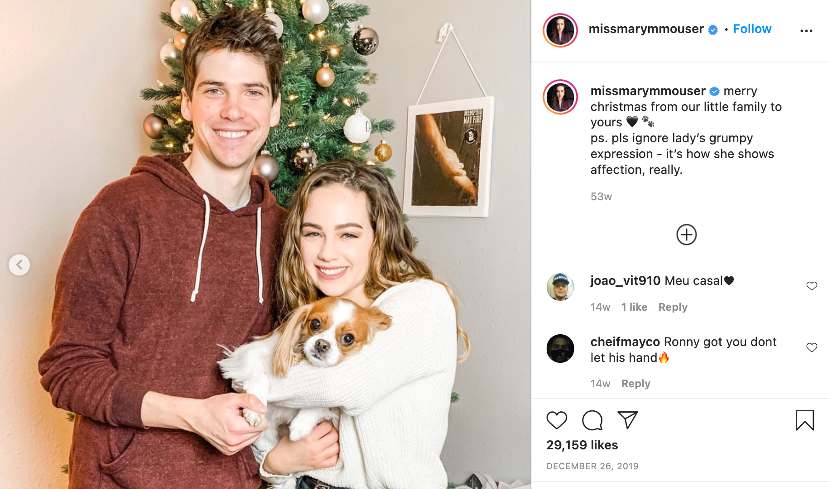