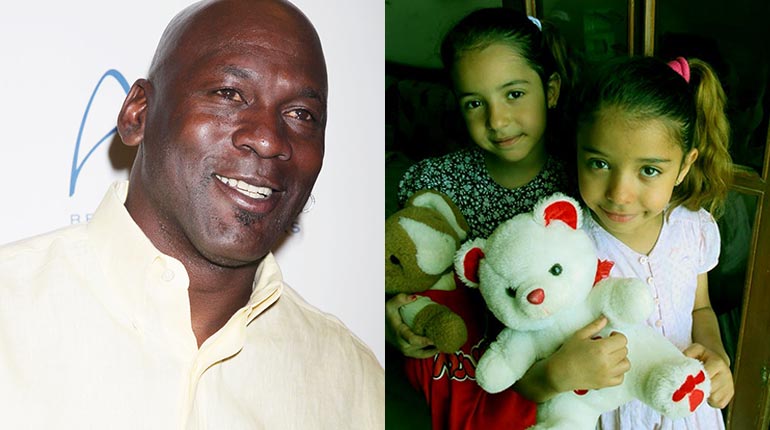 Michael Jordan, or ‘M.J’ as he is commonly referred to, is a basketball legend. The 57-year old former athlete is perhaps the best player to have ever graced the NBA. His time with the Bulls brought him six NBA titles, three All-star MVP awards, and five regular MVP awards.

The retired athlete is also synonymous with the Nike brand. His Air-Jordan sneakers, which were introduced back in the 80s, remain popular even today. Michael is married to a woman named Yvette. Together, they have twin daughters, Victoria and Ysabel Jordan. Meet the girls right here.

Ysabel is one half of Michael and his wife Yvette’s twin daughters. Like her sister, she was born on the 9th of February back in 2014. Her parents had met seven years before her birth at a nightclub in Miami.

They made things official a year before Ysabel Jordan, and her twin sister were born. It is fair to say that the girls were popular right from when their parents announced that they were expecting children.

On November 30th, 2013, Ysabel’s mother came out to confirm that she was pregnant. The news elicited positive reactions across the internet.

Ysabel Jordan, alongside her twin, was given a spot on the 2014 February edition of People Magazine. She was listed under the celebrity baby section. We also learned that the 6-year old celebrity child’s name was influenced by her mother’s heritage. In Spanish, ‘Ysabel’ translates to a gift from God.

Besides having Cuban roots, she also has an African-American heritage. As such, Michael Jordan’s daughter is mixed race.

Being only six years old, Michael Jordan’s daughter does not have any social media profiles. It is fair to say that no parent would let their child on the internet at this young age.

She is the twin sister of Ysabel. Likewise, Victoria was born back in February 2014, which makes her an Aquarius. The six-year-old girl’s father is one of the most famous people on the planet. As such, she is recognized as a celebrity child.

Also, Victoria Jordan and her twin sister have half-siblings from her father’s previous marriage. Despite her mother being Cuban, Michael Jordan’s daughter is American. It comes from the fact that she was born in the USA. Her parents have chosen to keep the twins out of the limelight until they are older.

Victoria and Ysabel Jordan’s other siblings.

Before the twins were born, their father was married to a woman called Juanita Vanoy. They went on to have three children together; two boys and a girl. The firstborn is Jeffrey Jordan. He was born back in 1988 and is set to turn 32 this year. His brother Marcus was born two years later. Juanita later had one more child, Jasmine, in 1992.

Both of Michael’s sons tried to follow in their father’s footsteps. The shoes were, however, both figuratively and too big to fill as both of the boys’ playing days did not go beyond college.