‘Home Town‘ is one of the fan favorites from HGTV. Ben and Erin Napier do an amazing job of renovating homes. However, there are also other characters who play a crucial role in the projects that the duo takes. One of them is the flooring expert, Mike Husers.

Mike is the floor guy in Home Town. He has been in the industry of flooring for the last 20 years.

And since January 2016, he has been working alongside Ben and Erin to renovate amazing homes in the show. As Mike’s profession requires a lot of sitting down and bending, he suffered from hip injuries back in 2020. Following that, he had to undergo surgery.

In this article, we touch on details regarding Mike’s health and also address the cancer rumors surrounding his wife. Let’s dive in.

What Happened To Mike Huser aka “The Floor Guy” from Hometown?

Mike’s surgery was successfully completed in September 2020. After the surgery, the floor guy had to take a rest for eight weeks before he could get back in the show. 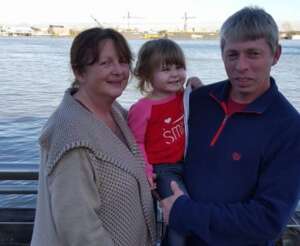 After his injury, the Home Town cast helped him a lot financially and emotionally. They were there in the hospital to check up on him after surgery and also made an announcement to the fans.

Erin Napier went further to start a GoFundMe campaign for the floor guy. As Mike was having financial problems, and he would also miss working in the show for the next few months, Mrs. Napier decided to take this approach.

After the campaign was successful, Erin also made this post on her Instagram notifying the fans about the surgery and Mike’s health condition.

According to Mike’s daughter, the floor guy is doing well in health as of 2022. Some time back, a rumor regarding Mike’s wife’s health spread in the HGTV Home Town’s fan group on Facebook. Many fans were commenting regarding the cancer of Mike’s wife.

In response to this, Mike’s stepdaughter cleared things up by posting in the Facebook Group.

Ragen Derrick stated that her mother didn’t have cancer. And thus, all the rumors surrounding the cancer were false. She also mentioned that both Mike and his wife were sound in health.