Todd Chrisley is a 51-year-old American real estate tycoon and reality TV host. He is famously known as the host for his reality TV show ‘Chrisley Knows Best’ This show revolves around his Christian family life and his excessive influence on the decisions made by his family members.

Todd is the anchor of the wealthy ‘Chrisley Family’ In this article, and we are going to dig deep into his personal life and know how he is balancing his double life. We are going to learn about his family, career, and controversies around his life, including the latest report about his recovery from Corona Virus, COVID 19.

Todd’s education history is a mystery. No one knows which high school he attended if he either went to college and which course he did. When questioned about his education, Todd challenges people to focus on his present career and success and not his past training.

Rumors have it that Todd did not attend college after high school. However, if the end justifies the means, we will assume that Todd was well trained, and his success is the result.

The collapse of the housing market made the Chrisley family in debt of more than $45 million, which is $30 Million from the bank as guarantee, $12 million mortgages, and $4.4 million wife loan.

Todd was left with no option but to file the chapter 7 bankruptcy petition in 2012.  He claimed to have $49 million as debt, $4.2 million as physical assets, $55 in the bank, and only $100 as cash at hand. However, during the court sessions, it was discovered that Julie, his wife, was receiving more than $700,000 as transfers from CAM corporate accounts.

The case was finalized in  2015, and Todd confirmed that his family was in a better state, both financially and psychologically. Julie is said to be wealthy on her own with a net worth of $3 million. She was the one supporting the family.

Todd appeared on few films in the past, including being a guest on Steve Harvey Show several times in 2012 and earlier on ‘The View’ in 1997.

It was until March 14, 2014, when his first show was aired on TV. ‘Chrisley Knows Best’ series got premiered on USA Network. This show revolves around Todd’s family portraying him as a strict father who is not afraid to go to the extreme to ensure his family stays on the line. The show was first shot in Roswell, and Alpharetta in Atlanta later moved to Nashville, Tennessee. 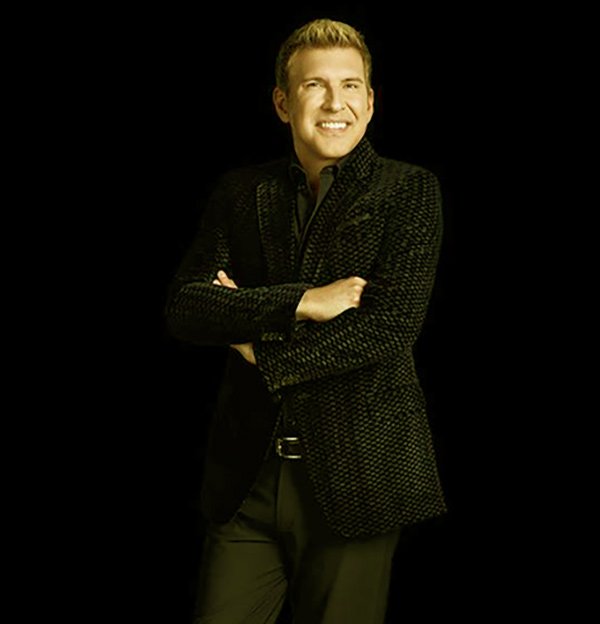 The show received a warm welcome after receiving more than one million views since its first premier. All the first five seasons have been viewed more than a million times. The show has run for eight successive seasons with a total of 144 episodes, 9th season was programmed for the year 2020.

The show has also been aired outside the USA. In the UK, it airs on ITVBe, in Australia, Ireland, Canada, and New Zealand. The first two seasons of Chrisley Knows Best can be streamed on Netflix. Back in the US, the show can also be streamed on Hulu, E! Bravo, and Video on Demand.

According to the wiki, in April 2, 2019, the show got a spin-off focusing on Chase and Savanna, Todd Chrisley’s children ‘Growing up, Chrisley’ Julie Chrisley also had a show of her own, ‘What’s cooking with Julie Chrisley. It was a ten-episode web series where she shares her favorite recipes.

Todd Chrisley’s Net Worth is $5 Million.

Things have been going south for the self-made millionaire after the collapse of the housing market. The result of the failed business adversely affected his net worth. Currently, he only earns from the show. Todd Chrisley’s current net worth is estimated to be $5million.

His salary per episode per season is yet to be revealed. Todd lives in a 30,000 square foot mansion with his family. He is known to be an extravagant spender. His son and daughter are driving classy cars, and he is said to be spending 300, 000 dollars on clothes per year. 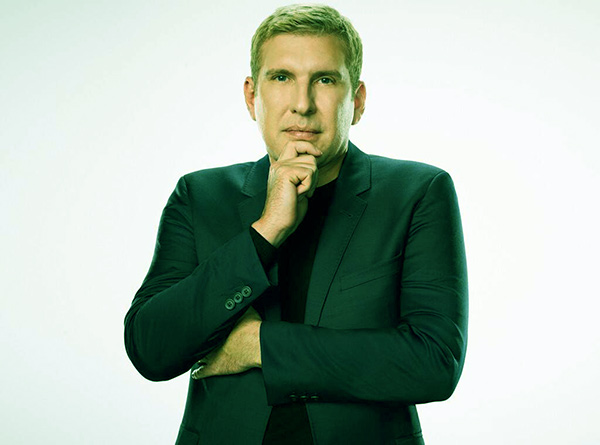 He was first married to Teressa Terry.

Todd Chrisley got married to his first wife, Teresa Terry. The details of how they met when they got married and their honeymoon destination are unknown, but they were blessed with two children Lindsey and Kyle. However, they got divorced in 1996 after Terry accusing Todd of being physically and verbally abusive. She filed a complaint in court for this that tarnished Todd’s reputation. 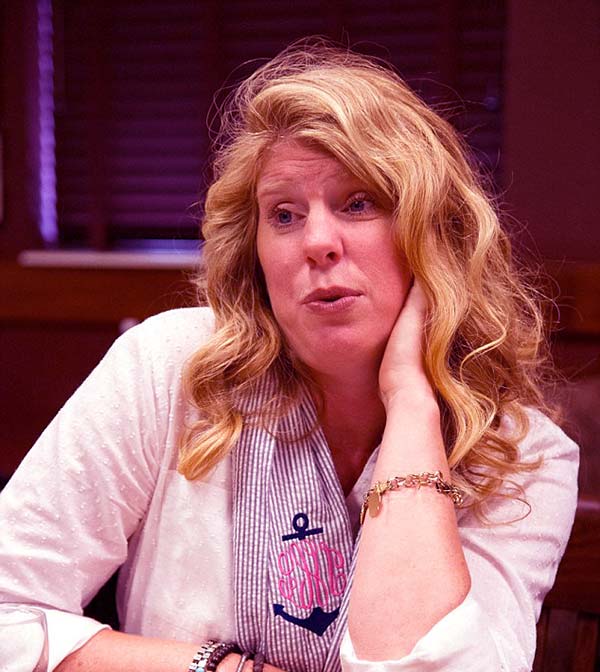 The same year Todd divorced his first wife, May 25, 1996, Todd married the second one, beauty pageant, Julie Hughes. Together, they had three kids. Julie is the daughter of clergy in Baptist Church. She is Todd’s lover, business partner, and best friend.

Julie was born and spent her early in South Carolina, USA. She was born on January 9, 1973, and is currently 47 years old. Julie was brought up in a humble family. The names of her parents are, however, unknown.

Her sibling, Harvey Hughes III, committed suicide when he was 25 years old, and this was a traumatizing experience for Julie.

Before meeting Todd, Julie had it tough on her by herself when she moved to Georgia. She had to work for low wage jobs to survive. Meeting and marrying Todd was her turning point. 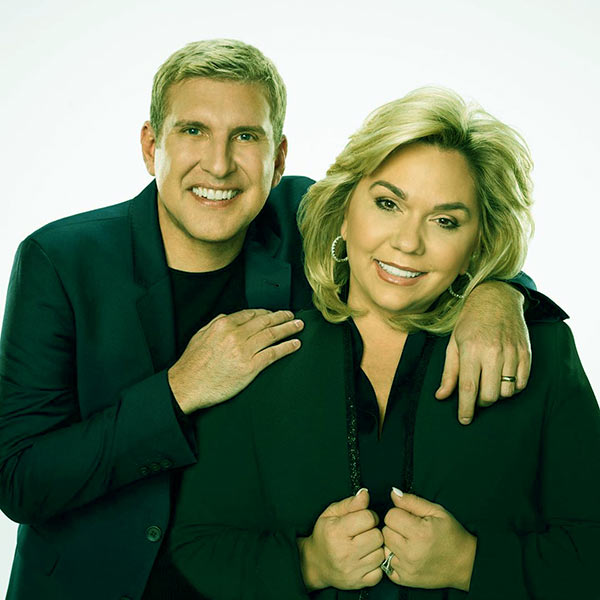 Julie’s net worth is estimated to be $3 million. She shares with her husband the ownership of their properties. She is 173 centimeters tall, and her zodiac star is Capricorn.

In 2012, Todd Chrisley’s wife Julie Chrisley was diagnosed with breast cancer. A cancerous lump was found in her breast and had to be surgically removed. The surgery was successful, and she was declared cancer-free. This experience has, however, changed her perception of life.

As opposed to her aggressive husband, she tends to install the attitude of being a composed mother who chooses not to throw tantrums over petty issues.

Todd has been blessed with five kids, two from his first marriage, Lindsey and Kyle, and three with Julie; Savanna, Chase, and Grayson. 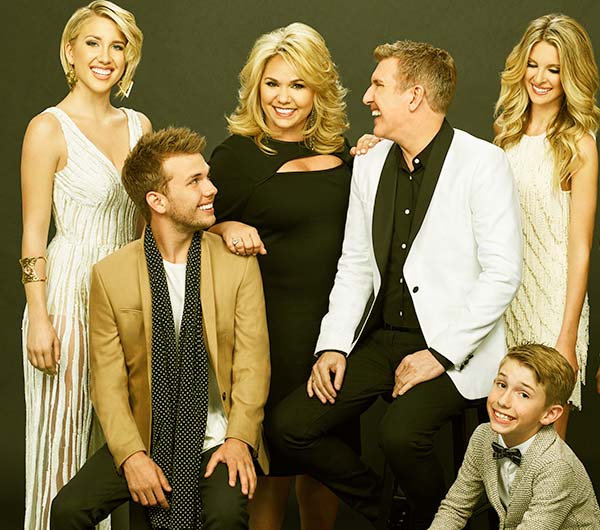 Caption: Todd with wife Julie along with their kids

Todd has two grandchildren, Chloe Chrisley and Jackson Campbell. Chloe is the son of his firstborn son, Kyle, who he had with his girlfriend, Angel Johnson. Todd took full custody of Chloe, and that was never welcome by Kyle.

In an interview with Kyle torn his father’s reputation into pieces by calling him names and saying that he only took Chloe, who is African-American only to get more views for his show. 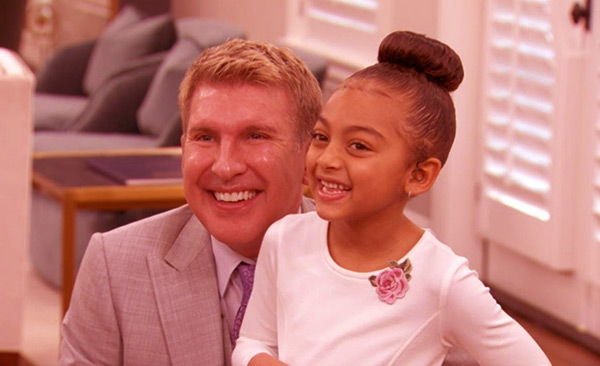 In response to those allegations, Todd clarified that his son is bipolar and has been suffering from drug addiction for a long time. He has even attempted suicide one time and is therefore unstable.

Kyle is considered the black sheep of the family and has been missing for a long time on the show, but is very well represented by his beautiful young daughter, Chloe.

In August 2019, Todd Chrisley and his wife Julie were arrested in Atlanta and charged in court. The couple was accused of multiple cases, including tax evasion, failing to file tax returns for several years, bank fraud, wire fraud and the conspiracy they had back in 2012.

Their accountant was also taken in with them. In defense, they said that the activities they are accused of were done by a former employee who went rogue, stole from the family, and committed all those other crimes.

They, however, had to place a bond of $100,000, and their movements were restricted to two states, Atlanta and California unless they were recording their TV show.

Todd is one celebrity who has caught the eyes of both male and female eyes. This is something he is proud of. However, he is straight and is so much in love with his wife, Julie.

Todd said in an interview that for him to be with another man, it will cost a lot, so much more than his great-grandchildren will never have to work, they will have enough inheritance for themselves. That’s a lot of money owing to the kind of life his family is living in.

Back in 2017, Todd spoke out about the ongoing gay rumors. he said,

“In order for it to disappoint me, it would mean that I don’t agree with someone being gay,”

The currently ongoing pandemic of Corona Virus, COVID 19 that has brought about melancholy worldwide and hundreds of death and infected millions, has not spared famous personalities. Todd Chrisley is one of the celebrities who came out and confirmed that he had been infected with the virus.

Todd started to feel headache, something he says he has never felt whole his life, and it got persistent, his body temperature was also rising and got to 100 to 103. He started to have body aches all over his body, and his family had to take him in for the test. After he tested positive of the virus, he had to be hospitalized for four days.

The four days in the hospital, Todd had visions that, according to his interpretation, his life on earth was so much spent. His daughter, Savanna, who says that his dad is her best friend was adversely affected by his sickness, in a post on Instagram and video chat with E!, she said that she had to take a family photo to his dad who seems to be given upon them.

She was sure that after seeing the picture, he would fight to stay alive. And her prayers were answered. After being released from the hospital, Todd had to spend another two weeks in self-quarantine, a period that says he only did two things: shower and sleep.

By the time he was giving the interview, Todd says that he was 75 percent normal, but the 25 percent remaining was way too much for him to contain. This is the ‘sickest he has ever been’ whole his life. We are glad he beat the virus.

Todd is by lack of a better description of a strict father. In the show, he has proven to be a man of both words and actions. He once threw his son’s laptop in the pool after the poor boy came home with low grades. That was a pretty gross form of punishment. He also controls his children’s online life. To maintain his sovereignty in the house, he has found himself throwing interesting parental quotes, and here is the list of some Todd Chrisley’s Quotes.

Keeping up with teenagers is a real task, Todd is doing his best. That is one thing we can agree on. His extremism maybe for the show, but he is concern dad for his young kids in this spoilt society.

Height and other personal details.

Todd is six feet and one inch tall. His weight is unknown. His ethnicity is unknown, but his race is white. He keeps natural hair.

Todd is very active on social media with verified accounts. His Facebook page has 2.2 million followers, has 2 million followers on Instagram, and 387.5 followers on Twitter. He, however, does not have a YouTube channel, but you will not fail to find videos of sessions he has had in the past, including interviews. 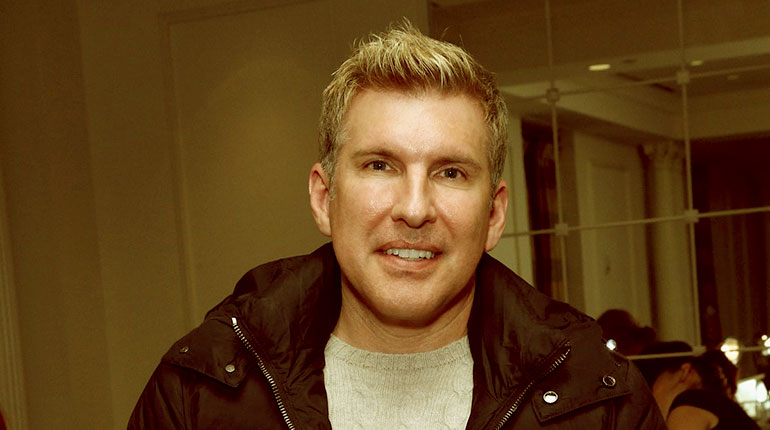