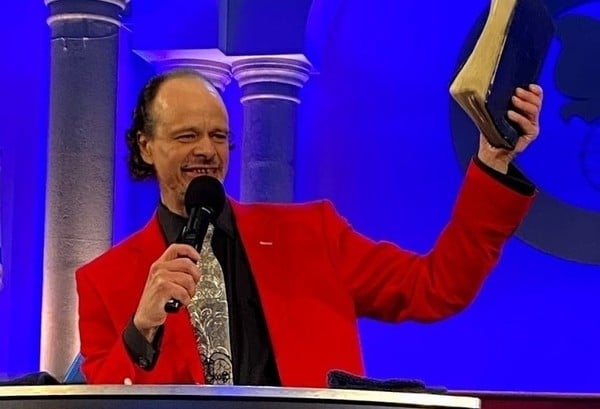 Only a handful of people in the World are known for their operations in a powerful prophetic anointing. Tracy Allen Cooke, commonly known as Tracy Cooke, comes with the practical and powerful teaching that connects men and women to God. He is no longer a stranger to signs, wonders, and miracles that the rest of the World rarely know. Based in North Carolina, Tracy dedicates his life to building God’s Kingdom by healing the nations. Read this to meet Tracy Cooke, Daughter, and wife.

In an interview, Tracy said, “In my dream, God sent me to a Laboratory in China and I saw the virus being created.” Many Americans believe prophecy like this from Tracy

So, who is this man that claims to have direct contact with God? Let’s learn about Tracy Cooke’s biography.

Prophet Tracy Allen Cooke is a 48-year-old American influencer. Tracy worked as Assistant Pastor of a local assembly. Serving in the Ministry, helping the pastor guide the saints, and teaching in a Bible School, he discovered his path to God.

Tracy’s life before 1992 is little known to the public. In November of 1992, he was bestowed with the gift of salvation from God. Tracy claims that God’s angel visited him in 1995 and assigned a task to sit at the feet of the generals of the faiths and learn what to do and what not to do.

He said, “I saw the presence of the angel and it was so real the first time. I was sitting there, praying to the Lord when I saw the angel sitting next to me. The angel gave me a task that was assigned by the high God to me.”

After that, Tracy traveled and worked for many years to bring God’s truth to World. He disseminates these visions and messages in simple words that are understandable to ordinary people. Frequent interviews, TV shows and his YouTube channel is popular among his followers. Recently, Tracy published a book called Heavenly Secrets to Unwrapping Your Spiritual Gifts to share the message from God to the larger public.

Tracy Cooke is all loved for his Ministry and Prophecy. At the same time, he manages to have a perfectly balanced personal life. Tracy has been married to Shawn for more than 20 years. His wife is often seen vouching for the Miracle life Tabernacle Ministries. The duo works together to spread the message of God to the World.

Tracy Cooke has one daughter, Hannah, who is herself a heaven’s precious angel. Unfortunately, the beginning of her life was quite tragic. Right from birth, Hannah suffered from the autoimmune disease named Eosinophilic Enteropathy- she couldn’t digest any protein.

At three years old, Hanna used to look like a nine-month-old stunned baby. Laying in the hospital, she couldn’t literally eat any food. Hanna was fed with a tube, taking foods directly into the stomach to prolong her life. Even the Doctor has lost all the hope, giving her life of a few days.

“We had built a misconception about the character of God. We knew that he would heal our daughter but all we could do was praying and pastoring”.

Later, Tracy got some visions of his daughter. He saw that Hannah was four years old, riding on a little red tricycle. In the following picture, she was going to the school in the green uniform, and lastly, she was walking down the aisle on her wedding day.

At the same time, he listened to the tape of Andrew Wommack speaking about his daughter from England. So, Tracy took Hannah to the UK, where Andrew Wommack laid his hands on her and said a prayer. Soon, Hannah was instantly healed and led a perfectly healthy life.

Tracy says that his Prophecy is a gift that encourages people. He claims that he can look at a man and see his name, address, and other things about the person in a glance. He believes that the office of the Prophet reveals the mind and will of God into the heart of the earth.

A year ago, his Prophecy about “Trump getting re-elected” was also very prominent. He said that he saw a dream of Hillary planning a plot to have the Democratic against Trump.

Another controversial Prophecy was about the Corona Virus when he claimed that he saw the Chinese democrats and scientists releasing the virus to destroy the world, especially America. He also said that there’s an antidote that’s coming soon but not presented yet.

A few days ago, he said that this decade would have a hard start. He said, ”

In the latter part of this year, the lord would heal the earth as we have lost insight into God. We get back to the Church, where we encounter the holiness of God. Initially, we might have so much negativity around us, but we must put our faith in God.”

People know Tracy Allen Cooke for this prophecy and this Ministry across America. Earlier, he used to Ministry on radio as well as television programs. His shows in “It’s Supernatural” and “Something More” is believed to be the true message from God himself. Along with the competency of the prophetic anointing, his actions are full of miracles.

Tracy is the founding member of Elisha Training Center and Miracle Life Tabernacle Ministries in Reelsboro. The Ministry is in the process of expansion in a different part of the United Nations. Currently, the team works from the television studio in New Bern, NC.

Tracy makes his earning from the Elisha Training Center and Miracle Life Tabernacle Ministries. He also owns a YouTube channel where he shares these Prophecies and visions. Unfortunately, we do not know about his net worth and living standard.

God has raised Prophet Tracy out of this obscure place and assigned the task to influence all nations. People listen to his vision and ministering throughout the Globe.

You can find more about his personal life on his Instagram.