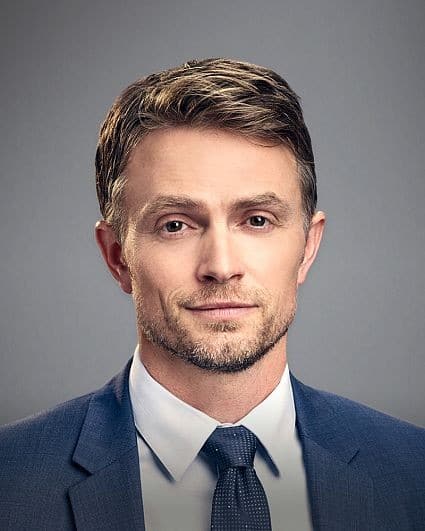 Stephen Wilson Bethel is one of the hottest things going on in the television series industry. He is an American actor and producer famous for his role as Wade Kinsella on CW’s newest comedy-drama show, Hart of Dixie.

What has also made him talk about the town is his recent wedding with his Latina girlfriend. Since then, fans have been buzzing all over the internet regarding the couple’s newly wedded life.

Who is Wilson Bethel?

Wilson Bethel is a young and prominent actor who is most famous for his TV series and movies. He was Agent Benjamin in Daredevil and Ryder Callahan on The Young and the Restless.

Wilson was born on February 24, 1984, in Hillsborough, New Hampshire. He holds an American nationality. Bethel’s mother is a renowned author, Joyce Maynard. Likewise, his father is Stephen Bethel, an artist. Wilson is close to his mother. He has also narrated one of his mother’s books called Labor Day.

The Bethel family is enormous. Wilson grew up with a total of eight siblings, including half-siblings and step-siblings, thanks to his parents divorcing and re-marrying. Wilson’s stepfather is Jim Barringer, who passed away in 2016.

Nonetheless, Wilson was interested in acting from a young age. He went to LA and later started to appear in movies and television.

Wilson Bethel is Married to his wife Liesl Martinez since 2020

Wilson is a happy man ever since marrying his sweetheart in 2020. However, this Young and the Restless star kept his relationship a secret for a long time. Not many of his fans knew that Wilson was having an affair with Liesl Martinez. Though people knew that he was dating and breaking up with other women in the past, no one had a clue about his now-wife.

However, Wilson’s family was well aware of his affair. Wilson’s well-wishers came to know about his new relationship when his mother Joyce Marnad posted a statement on her Facebook saying that she spent Thanksgiving in LA with her son and his sweetheart. Hence, this proved that Wilson was in a relationship.

But it wasn’t until 2020 that fans could see things clearly when Wilson and his new wife announced their marriage, though neither Wilson nor Liesl has revealed their engagement date to the public.

Regardless, Wilson and Liesl’s wedding ceremony was one to remember. They tied the knot in the California desert and exchanged their wedding vows in front of a Joshua Tree.

The wedding was a private ceremony, and very few people attended this wedding. Unfortunately, Liesl’s mother could not be present at the event that Wilson’s brother carried out.

Wilson’s fans may not be familiar with Liesl, but Liesl Martinez is a former actress. She is a Latina actress who comes from the Dominican Republic.

Liesl completed her high school education from Colegio Barbeque Secundaria. After completing high school, she moved to UNIBE in the Dominican Republic. After that, Liesl moved to Mexico City in America. Later, she completed her university education at Pratt Institute in New York City.

Her current occupation is unknown.

It is no doubt that Wilson has a staggering net worth as of 2021. His primary source of income is acting in TV series and movies. He has been doing this since a young age. Hence, this 37-year-old actor’s net worth is estimated to be around $4 million as of 2021.

Wilson has had roles in some of the prominent movies in his career. However, he almost got the part of Captain America at one point. Achieving that role would have significantly boosted Wilson’s net worth even more.

Apart from acting chops, Wilson used to be a DJ as well. Back in the days, he made a decent sum of money by producing vinyl records and mixtapes along with his brother.

Also, Wilson is the co-owner of a chain restaurant in LA called Fat Bethel Burger. Likewise, he also owns a football team called Hillsborough Angels. Similarly, Wilson’s brand of products such as a Pure Wonderbethel vodka and With Love from Wilson perfume have contributed to his fortune.

Wilson Bethel Girlfriend: (his past girlfriend and dating life)

Even though Wilson is a married man, Liesl is not the first woman to fall in his charm. Previously, he had affairs with various actresses.

One of his most famous affairs was with a fellow actress, Hassie Harrison. At first, Wilson and Hassie kept their relationship a secret until they began making public appearances. Finally, in 2013, they announced their relationship to the public. Fans of both Hassie and Wilson were very excited to see the couple together.

In an interview with Cosmopolitan, Wilson revealed that Hassie was his dream partner. Many even thought that the couple would get married. But Wilson and Hassie split after some time and did not see their future together. Although they did not reveal the reason for their breakup, fans were genuinely shocked after Wilson and Hassie parted their ways.

The last time Wilson and Hassie made a public appearance was in April 2014, when the former couple attended the birthday party of their familiar friend.

Apart from Hassie, there were also some rumors about his affair with co-star Rachel Bilson. Since Rachel and Wilson are the co-actors on the show Hart of Dixie, many people speculated about their affair. However, there were no facts to support the rumor. Hence, this gossip ended very soon.

Wilson Bethel is a gifted actor who has appealing looks and body. Bethel stands tall at 6 feet, which is 1.83 meters. His wife is a little shorter than him.