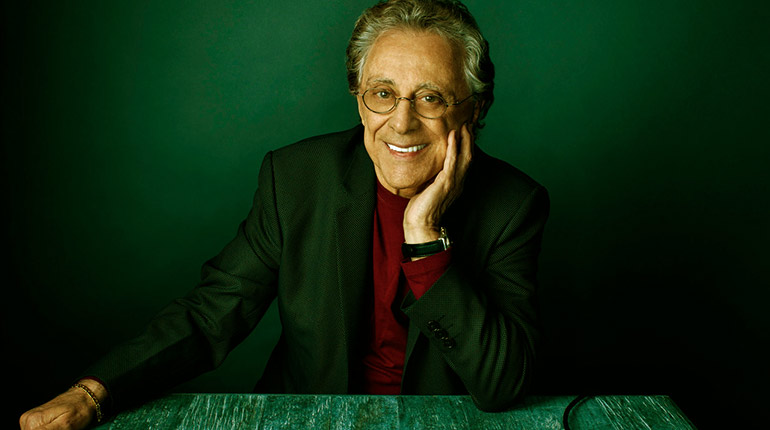 Frankie Valli is an 86 years old American legendary singer and lead vocalist. He is famous for being the frontman for the ‘Four Seasons Band, an internationally recognized pop and rock band. Frankie is widely known for his unique ‘falsetto voice’; powerful tenor voice.

In this article, we will not dwell on his successful music career but shift focus to his personal life. Frankie has been married three times, but that is just a tip of the iceberg, we will get into details of these failed marriages and get you facts about them. You will also get to know about his children and other family members.

Frankie married his first wife, Mary Mandel, when he was 23 years old. They were in the same age set with his wife, who came to the marriage with a toddler, a two-month baby girl named Celia, who Frankie took in as his own.

Mary bore him two more daughters, Antonia and Francine. In 1971, that was 18 years later, and the couple decided to terminate their marriage prematurely. Mary did not get married after her divorce, but Frankie once again retied the loosened knot by marrying the second wife.

After three years of being a single singing father, Frankie met another lady to settle down. Interestingly, her first name was slightly modified but very similar to that of his first wife. Her name was Maryann Hanning.

Frankie Valli and MaryAnn Hanning got married in 1974 and stayed together for eight years before divorcing in 1982. This is the shortest of all his marriages.

Also, it is the only marriage that did not bear any child. It is not clear if MaryAnn got married again. According to her LinkedIn profile, she has been involved in youth development for many years, having been the ‘Teen Director’ for ‘Boys and Girls Clubs of Yellowstone County’ since 2013. Other than that, there is no personal information about her.

From 1982, Frankie took another two-year break before giving it one more try. According to a scientific study, a person can fall in love with a maximum of three individuals, and this can only occur at different times.

We can argue that Frankie is a perfect example; his marriage was with a lady named Randy Clohessy that took place in 1984. This marriage lasted for 22 years, the longest of all, and they were blessed with three boys, Francesco and twin brothers, Emilio and Brando.

Frankie’s last divorce did not go as smoothly as the previous ones, matters rose, and it took the jury to give the final word. Randy claimed life insurance worth 3.75 million Frankie took in her name when she got terminally ill in 2013, before the divorce.

However, the Supreme Court had to overturn a ruling made earlier by a lower court in favor of Randy. The Supreme Court ruled that the money belongs to the California community, and not any of the two. Being a philanthropist, Frankie accepted the ruling, but his former wife was not pleased.

Francine was passionate about music, just like his father. However, death cut short her promising journey. She did a few songs which are available in the internet. Francine died on 6th August 1980, at the age of twenty, from a drug overdose. It was claimed that Frankie Valli’s daughter Francine committed suicide, but the family said those are a hoax. She overused a drug called Quaaludes, a sedative and wrong prescription for hypnotic.

Francesco is the firstborn son of Frankie. He took a different turn from his father and became an actor. He has made to the significant appearance on the screen, first one in 1987, ‘Full House,’ a reality comedy series. In 2014, he also appeared in ‘Reach Me,’ a crime and drama movie. Other than his film career info, other subtle details about Francesco are not available in public.

Antonia is firstborn in Frankie’s family. It is believed that she is also a singer. After the separation of their parents, most of the fine details about their children are not known. Antonia is still alive, no rumors about her demise.

Celia was the adopted daughter Frankie took in in his first marriage. Celia’s life was cut short when she was very young. The same year that Francine died within six months.

This was a lousy year for Frankie, and it is the same year that he underwent a risky surgery on his ear after risking going deaf.  Celia died in a fire accident, and she fell in the inferno while trying to escape the fire.

Emilio is a real estate agent and has also had a successful film career. After his parent’s divorce, they were left with a house that required some real estate management skills, and he stepped in and filled those shoes; that was the start of his interest in the real estate business.

He is currently based in Malibu, where he runs his business. Before that, he lived in Long Island, NY, where he worked as a production manager assistant for various films, including CSI Las Vegas and Marvel’s Agent Carter. He has an associate degree from Los Angeles Film School.

Born in 1994, Brando is Emilio’s twin brother and the sons of Randy. Contrary to his brother, there is no information about him. The career path he took is unknown; however, we are on the look to give you updates about him once such information leaks out.

Frankie was raised alongside his two brothers Bobby Valli and Alex Valli. However, there is no information about these two men who did not have as much talent as their brother and therefore succeeded in keeping their life away from the limelight.

Francesco Stephen Castelluccio was born on 3rd May 1934 in Newark, New Jersey, USA. His father, Anthony Castelluccio, worked as a barber, while his mother, Mary Rinaldi, was an employee in an alcohol production company.