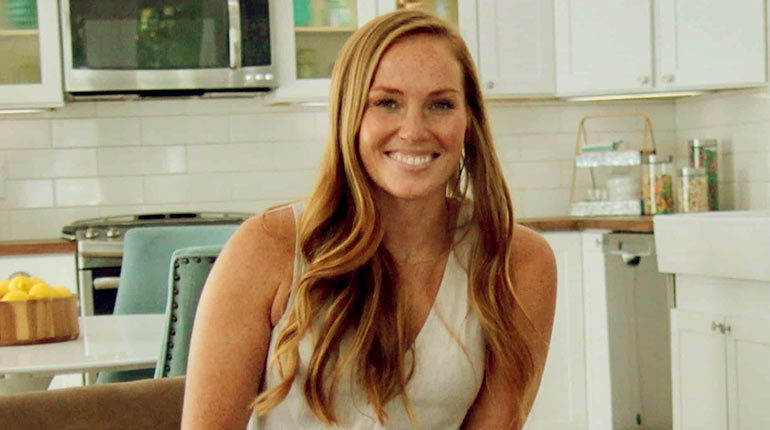 Mina Starsiak is an American TV Actor. She is known well for starring on the Reality Television Show, Good Bones. Mina stars alongside her mother, Karen Laine. Together, then turn houses in poor conditions into stunning remodels. Apart from that one show, Mina has also appeared in Brother Vs. Brother, Rock the Block, and A Vey Brady Renovation. In this article about Mina Starsiak, we are going to discover much more about Mina Starsiak.

As you read along, you will learn her career, net worth, early life, age, and marriage life. Who is Steve Hawk? Mina Starskiak’s Wikipedia biography here.

Her Marriage with Steve Hawk.

Mina and Steve Hawk met back in 2013. They met first through Facebook because they had mutual friends. There are not many details on their relationship. However, Mina mentioned that their first date was at a baseball game. But it did not go as well as expected.

Steve wasn’t paying attention to her, and his friend was also hitting on her. Their second date must have gone well because they started hanging out more after that. Mina even started posting him on her social media.

Three years later, Mina and Steve Hawk decided to get married. Their wedding took place on 11th June 2016, and the reception was at City’s 1989 Building. Instead of a wedding cake, the married couple served their guests 400 donuts.

Steve and Mina currently have a son, Jack Richard Hawk, and they are expecting baby number two. Mina revealed that she was going through fertility problems, and she had been struggling to get pregnant before. A few months ago, she received news that she was expectant.

Who is Her Husband Steve Hawk?

Stephen Hawk is known as Mina Starsiak’s better half. He was born on 11th February 1981. Unlike his wife, he prefers to live a private life. Steve has not yet revealed details of himself, his educational background, career, and family. It was rumored once that he had appeared in a film in 2010, ‘Heart and Soul.’ Few details were mentioned regarding his job.

Mina and Steve technically have two children though one is still on the way. Their first-born child is Jack Richard Hawk. He was born on 9th August 2018. Jack is currently a year old and is cuter than ever. Mina had the chance to practice her parental skills. Last year, she dedicated a whole nine months to care for her niece, Julie.

Her sister was going through a rough time back then. Their Unborn child is due in September 2020. Mina and her husband already picked the name Charlie Drew because it is unisex.

Starsiak is a businesswoman. She has worked in real estate and has done plenty of home renovation businesses. Her first project was in 2007, when she secured a contract to renovate a house.

Later, they decided to start their own real estate company, and they named it Two Chicks and a Hammer. Mina and her mother have rebuilt over twenty homes before they were chosen by HGTV to make their show.

The Reality show ‘Good Bones’, was first aired on HGTV on 22nd March 2016. So far, it has five episodes. Mina was also featured in other shows.

It was also aired on HGTV. Women who did home renovations were competing against each other to renovate houses and add value to them.

The competition lasted four weeks, and the winner would get a cash price. Rock the Block was made its debut on Television on 21st October 2019. The contestants were Mina Starsiak, Jasmine Roth, and Leanne Ford. At the end of the season, Jasmine Roth was declared the winner.

The Reality show features remaining members of ironic sitcom and HGTV stars. They work together to renovate the Studio City in California house where The Brady Bunch was filmed in the ’60s and ’70s.

According to various sources, Mina’s annual salary is said to be $65k. Mina’s income comes especially from flipping houses.

As mentioned before, she started a real estate business called Two Chicks and a Hammer. The company renovates home in Fountain Square, Bates Hendricks, and nearby areas. One of their aims is to finish flipping 14 houses by the end of the year. Mina’s mother, however, retired last year.

The Two Chicks and a Hammer business sells merchandise such as shirts, jackets, caps, water bottles, candles, and stickers. A tee shirt is sold @$30, water bottles @$30. If you go on their website, then you will be able to purchase any item. Mani’s business also offers Airbnb in the homes that they have built. They charge $148 a night, and so far, the reviews are mostly good.

As you can see, Two Chicks and a Hammer brings in a lot of money. Mani being a renovator, we can be very sure that she lives in a lovely home with her family in Indiana.

Mina Starsiak Hawk is estimated to have a net worth of $1.4 Million.

According to the media, Mina Starsiak has seven siblings. Mina’s siblings are Kelsy, Jess, and Tad. Recently, Mina posted that her sister Stephanie had passed away. Stephanie was not her actual sister, but she was her brother’s wife. They were so close that she referred to her as a sister.

Mina’s brother Tad Starsiak features on the Reality show, Good Bones. There’s not much information on Tad. Though, we know that he is in his 30’s. Mina and her brother get along quite well.

It was Mina’s son, Jack that had undergone a routine operation. As a mother, Mina was anxious at that time, but her fans and family were able to comfort her. Mina’s son jack had an Undescended testicle which needed to be put in place to avoid future complications. Jack is currently fine now and very healthy.

Mina Starsiak (Karen Laine’s daughter) was born on 26th November 1987 in Indianapolis. Her parents are Casey Starsiak and Karen Laine. She is currently 32 two years old and expecting her second child.

Mina was born and raised in Indianapolis. Before her parents divorced, Karen had three children with Casey. Not everyone loves to be in the limelight. Mina’s parents re-married again, hoping to rekindle things, but their second marriage did not work out either.

Karen’s husband is Randy. They have a daughter together, Kelsy. Mina’s father, Casey, also remarried a woman named Cheryl. They had two children together: Jess and Tad.

Mina Starsiak went to a local high school in Indiana. After she graduated from high school, she attended the University of Indiana and majored in Business and Sociology. Mina then graduated with a Degree. She has not said when she graduated. Before renovating houses, Mina worked as a waitress to pay for her daily needs.

A look at her social media activity.

Taking a look at Mina’s social media, we learn some interesting facts about her. The first one is that she loves dogs. So far, she has three dogs that she had rescued. One of her dog’s name is Frank. Her Instagram handle is @mina_starsiak_hawk, and she has 284k followers. Apart from Instagram, Mina has other social media accounts that she uses to advertise her business.

Mina stands to be 5ft 7inches tall and weighs about 64kgs. However, she has definitely gained more weight since she is expecting another child. Below are some interesting facts about Mina.