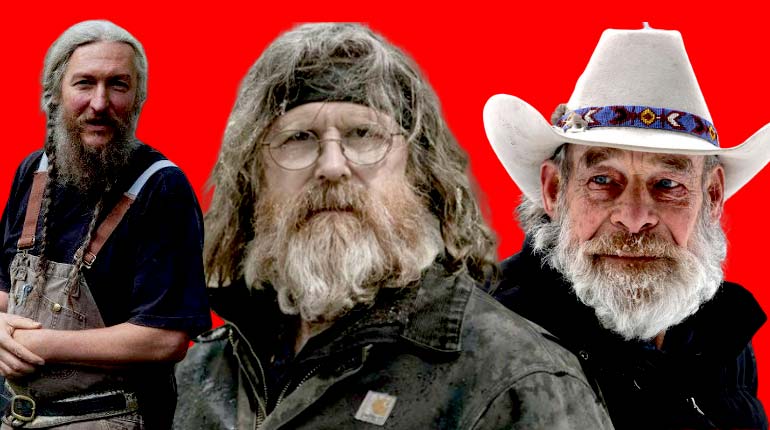 Mountain Men is an American Reality show which is aired on History Channel. If you have watched TV shows like Alaskan Bush People, Mountain Monsters, Swamp People, and Life Below Zero, then you would enjoy watching Mountain Men. Continue reading to know Mountain Men Cast Net Worth & Salary.

The Reality show has not won any awards yet, but it has caught the attention of many viewers. In this article, we are going to discuss the cast of Mountain Men. We will find out each of their net worth, salary and we will also talk about the ones who died. Read along to find out more details about the show. Also, know who died on Mountain Men.

The Reality show features men who prefer to live off the grid away from modern technologies. It was first aired on 31st May 2012. The executive producers of Mountain Men are Russ McCarroll, Chris Richardson, Jake Luefer, and Marc Pierce. And who talks to the viewers on the show? D.B. Sweeney. He is the one and only narrator.

The current cast includes Tom Oar, Eustace Conway, Jason Hawk, and George Michaud. Four others left the show. Mountain Men has nine seasons and a total of 140 episodes. It is all about survival.

The men have to do their best to make their lives as comfortable as possible. Living in the wilderness, especially during the winter period, can be challenging. Viewers get to see how they build their shelters, how they survive in low temperatures, and how they deal with diseases.

According to sources, each cast receives $10,000 at the end of every season. However, the original cast gets a slightly higher wage than this. These include the likes of Eustace and Tom. The mountain men use their skills to make a living. They earn income through selling firewood, making knives and blades, protecting residents from predators like wolves.

On 24th July 2017, Mountain Men lost one of their cast, Preston Roberts. Though he had a small role on the show, his presence there was valued. Preston had been struggling with Liver Cancer. Unfortunately, it was discovered to be inoperable, and he later died due to liver complications.

He is skilled when it comes to making knives and fishing. Preston was very close to Eustace Conway. They met way back in 1982 and have been buddies since then. That is why Eustace had a hard time adjusting to his friend’s death.

Preston Roberts had a wife, Kathleen DuPont McGuire, and together they had three children. He used to be an artwork instructor in North Carolina. Apart from that, he was a high school teacher, but he had retired a while back.

After his retirement, he began teaching primitive survival skills to Native American People. Roberts passed away with a net worth of $2.5 Million. His last appearance on the show was in its sixth season.

Conway is an American TV star and Naturalist. He was born on 15th September 1951 in Columbia, South Carolina. He graduated from Appalachian State University with a Bachelor’s Degree in Anthropology and English. Eustace Conway made his first debut on screen in Mountain Men. He has been on Mountain Men since it first aired in 2012. Presently, he is still a recurring member of the cast.

He lives on the Blue Ridge Mountains, and he owns his land, which he calls Turtle Island. Eustace is the main character in the Reality show. He teaches basic survival skills to people who have interests in how to live in the wilderness. He makes his living by selling firewood.

Aside from doing his best to survive in the wilderness, he also works hard to keep his land. You must be wondering how much this old folk earns from the show. Conway is said to be making $130k annually. Aside from that, sources say that he has a net worth of $2 million.

Tom Oar is Back.

There have been a lot of rumors about Tom Oar leaving the show, but we are here to tell you your favorite mountain men is back in 2022. Mountain Men Tom Oar was born somewhere in 1943, Illinois, United States. Tom used to be a Rodeo Cowboy back in his days. He lives with his wife around the Yaak River. The old couple also has a dog named Ellie. Tom has been part of the show from season one. He disappeared from the show in its 8th season.

There were rumors that he had retired from the show. However, that is not the end of him; we might be hearing from him soon enough. Tom Oar, who is 79 years old, has the true survival skills of surviving in the wilderness. His survival skills include trapping, harvesting meat, and tanning hides. Tom has a net worth of $250,000.

Jason Hawk is a skilled American hunter, blacksmith, homesteader, and a TV star. He has been on the show starting from season 5 to date. So far, he has been in 27 episodes already. Jason lives near Ozarks, Arkansas. He is happily married to Mary Hawk, and they have two children together: River and Madeline.

Since their daughter’s birth in 2018, Jason and his family had to move back to the life of civilization due to his wife’s complications during delivery. We know for a fact that he returned to the show later on.

Before Jason came to live his life in the wilderness, he had studied Metal Fabrication and welding. This gave him more skills and knowledge as a bladesmith. Jason obtained his hunting license at the age of 15. If he was already hunting at that age, imagine how good he is now in hunting.

Jason Hawk makes his living mostly by making knives and blades. If you need knives for hunting from him, you will have to go all the way to Arkansas because Jason Hawk does not have access to modern technology.

Apart from Mountain Men, Jason Hawk was also featured in another Television shown known as No Man’s Land in 2014. He appeared in all eight episodes of the show. Jason Hawk has an estimated net worth of $400k.

George Michaud Has left the Show

Michaud is an American fur trapper and a conservationist. He lives along the Snake River and the Teton Range in Idaho. He joined Mountain Men in its 2nd Season. George Michaud has been on the show for only six episodes back in 2013. He made a living by selling tanned items and making leather off animals.

Whatever animal he catches, Michaud does his best to make use of every single part. He has not disclosed much information about himself. However, we know that he has an estimated net worth of $100k.

The cast who left Mountain Men.

Lewis made his first appearance on the Reality show, Mountain Men. He has been a mountain man for most of his life and once commented that he would rather die than live in an apartment.

Rich Lewis lives in Ruby Valley, Montana, with his wife, Diane Lewis. Rich Lewis was a mountain lion hunter. As you watch the second to the sixth season of the show, you would see him hunting mountain lions and wolves with the help of his hounds.

How did he get by in the wilderness? Rich Lewis would be hired from time to time to drive off predators such as wolves. They were causing distraught among the residents of Ruby Valley.

As risky as it was, the old man enjoyed hunting mountain lions and wolves. Rich would even be contacted by wildlife reserve to assist in catching animals, which had gone out of control.

It was sad to hear that he had left the show and would not be returning after season 6. His reasons were that he was getting too old. Rich Lewis has a net worth of $300,000.

Charlie Tucker is a logger and a trapper. He lives near The Great North Woods in Ashland. Before his debut on screen, Charlie was already well known. His house was a local attraction. Many people would come to view the cabin which he had built by himself. There is not much information on Charlie Tucker though we know that he has been a logger for 25 years.

Charlie had been on the show from the 2nd season to the 3rd season. He quit the reality show so that he could focus on his career as a lumberjack. Charlie has a net worth of $ 500k.

Kyle Bell and his son Ben joined the show in the third season and made their last appearance in the fourth season. They never gave a reason for leaving the show. Viewers loved the father and son duo. Though they always wondered where Ben’s mother was. Kyle was a Game Hunter, and he would go through the 45,000-acre land to hunt.

He also taught his ten-year-old son survival skills and how to hunt in the wild. Since they left the show, they returned to the modern-day world. Ben Bell has his own YouTube channel where he posts blogs. He currently lives in New Mexico with his father.

Marty Meierotto is a tracker legend. Apart from having excellent tracking skills, he is also very good at trapping. Marty is married to Dominique, and they have a daughter together, Noah. Marty and his family have been featured on the show from the first season.

Yes, Marty was one of the original casts of the Reality show, and it was sad that he did not come back for the eighth season. The Meierotto family lived in Two Rivers, a small Alaskan town.

Marty Meierotto also had an aircraft- Piper PA-18A-150 super Cub. His reason for leaving the show was that he was tired of being on screen and that he wanted to live a quiet and private life with his wife and daughter without cameras on their faces.

Though the Reality show has gained a lot of fans and viewers, there have been questions on how real the show is. There are a few facts that make viewers doubt that the stars of the show are mountain men.

Tom and Nancy Oar have a cable.

Tom and his wife admitted to the media that they watch Mountain Men every week. And how would you watch television with a cable which is modern technology? This left people doubting the authenticity of the show.

One of the cast members, Tom Oar, admitted that the producers make his life on screen seem very dangerous most of the time. According to Tom, his life isn’t that dangerous on a daily basis.

Some casts have an online store.

How can a cast from the show have an online store when they are supposed to be living off the grid and away from modern technology? There is no actual proof of any of them having an online store. But, wouldn’t they benefit more from selling their merchandise online?

For Jason Hawk, he peddles his wares from his web store. Perhaps he developed a solar-based internet that does not require internet companies.

The cast is not as poor as the producers claim them to be.

First things first, have you seen their net worth? Even though they look like they are struggling, they are not that poor. Look at Eustace Conway; his business is booming because he has gained popularity over the years because of the show.

Even though there are many reasons for viewers to doubt the show, not all of it is fake. The extreme weather condition is genuine.

The camera crew has a hard time moving around in the cold to film the show. One of the cameramen even almost lost two of his fingers because of frostbite. Was it not for Eustace Conway’s quick reaction, the cameraman who has lost his fingers?